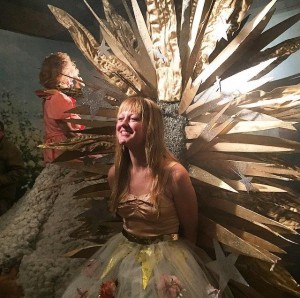 has been working as a studio assistant for artist Ann Hamilton. During 2009 and 2011 at OSU, Fine taught Beginning, Intermediate and Advanced Darkroom Photography. In 2012, she was artist-in-residence at The Wellington School in Columbus, OH, where she worked collaboratively with pre-K through 12th grade students who contributed to the project through storytelling, designing costumes, constructing props and enacting their stories for the camera on a series of local fieldtrips. Fine’s work was exhibited in a group show at The Columbus Museum of Art and she spent three months in Dresden, Germany, on an artist residency, which culminated in a performative installation entitled The everyday things at Geh8, formerly an East German train station. In this installation, for the first time, Fine became a performer alongside “Flat Granny”, a life-sized photographic cut-out of her grandmother worn as a costume.[Sg13]