Dr. Wendy Castenell was named to the Tyson Scholars Think Tank at Crystal Bridges Museum of American Art, in Bentonville, Arkansas. Taking place in August 2021, the Think Tank is a competitive, three-week fellowship for scholars of American art, led by a distinguished scholar. This year’s group of scholars, including Castenell, is led by American art historian Dr. Carrie Rebora Barratt, formerly curator of American art and deputy director for collection at the Metropolitan Museum of Art in New York.

Barratt, a scholar of the white American artist John Singleton Copley (late 18th- early 19th-century), will lead the group in putting together a “toolkit” for re-examining the canon of traditional western art and will explore ways to “re-present and reckon” with the exclusive canon of western art.

Dr. Castenell, who teaches African American art history, has already been exploring ways of approaching a more inclusive understanding of American art, both in the classroom and in her research. She said, “Some of these methods include teaching art created by and about Black, Indigenous, and other people of color (BIPOC) alongside white artists and subjects to recreate the canon; decentering settler colonial narratives in American art; including art from all regions of the country, especially moving beyond the Northeast and its cultural legacy. And,” she added, “being proactive in uncovering art produced by BIPOC artists, even if they aren’t from traditional ‘fine art’ media.”

During the fellowship, Castenell said that she will focus her scholarship on a portrait of a free man of color – Nicolas Augustin Metoyer, the eldest of ten children of a formerly enslaved woman and a wealthy Frenchman who had a twenty-year relationship. The Frenchman eventually purchased the freedom of the enslaved woman (and Coin Coin, the formerly enslaved woman, purchased her children’s freedom) and gave them land and money, which they used to establish a plantation. “It became one of the largest cotton plantations in the region,” Castenell said, “with about 200 enslaved people, making the free people of color Metoyer family one of the wealthiest and most influential planter families in the community.”

“This story, and the portrait, are examples of a way to diversify American art. It presents an uncomfortable narrative of a family born from slavery, with close ties to Africa and the Middle Passage, who then became enslavers,” Castenell said. “It’s not a pretty story, but it’s a real one, and one that should be better known.”

Castenell said that she will also use the fellowship to rethink and rewrite a chapter on the Metoyer family in her upcoming book, “Creole Identity in the Art of the South: Louisiana from the Colonial Era to Reconstruction,” to be published in the spring of 2022. 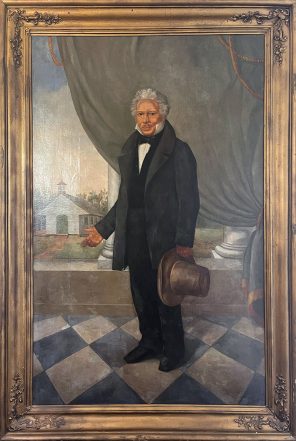 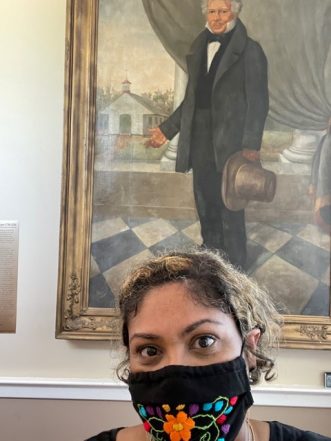 Dr. Wendy Castenell with the subject of her research, “Portrait of Nicolas Augustin Metoyer and the Church of St. Augustine.”