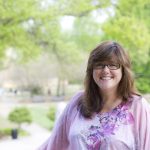 annual American Advertising Awards (ADDYs) ceremony on February 23, 2017. The Best of Show award was chosen from among ten Gold ADDYs awarded that evening. Lineberry’s Christmas card design for TotalCom Marketing won the Gold ADDY and Best of Show. Lineberry constructed almost forty individual cards by hand for each of TotalCom’s clients using recycled print publications created for them. Lineberry’s project competed with topnotch entries that included UA Office of Strategic Communication’s Legends Campaign. Lineberry also won a Silver ADDY for a poster series designed for Jackson Hospital in Montgomery, Ala. She said, “I am deeply honored by this award and was completely surprised by it.”

Sponsored by the AAF, the American Advertising Awards (formerly the ADDYs) honor excellence in advertising and seek to cultivate the highest creative standards in the industry. The competition begins at the local level with the 210 AAF member clubs nationwide from which local winners proceed to 14 regional competitions, and those winners proceed to the national finals. In addition, entries are solicited and accepted from entrants outside the U.S. whose award-winning work joins the prestigious list of Gold AAA winners.

More than 250 entries were submitted from West Alabama and East Mississippi. The Gold ADDY winners automatically qualify for the district competition. AAF Tuscaloosa has been the key professional organization for area advertising, marketing and media businesses for almost fifty years and is an active affiliate of the American Advertising Federation.

Lineberry has received the Best of Show award in three previous years: in 2014 for Mosaic Magazine (Student Division); in 2000 for her work on Folmer Architectural Millworks Annual Sales Catalog; and in 1994 for UA Japan Program’s “Sakura Brochure.” She was also the Recipient of a Best of Show in 2014 at the Mississippi Hospital Association’s Maggie Awards on behalf of her client OCH Regional Medical Center in Starkville, Mississippi. The Maggies recognize outstanding marketing and public relations work submitted by professionals from the health care sector in Mississippi.

A UA alumna, Laura Lineberry has been a full-time instructor in UA’s the Department of Art and Art History in digital media and graphic design since 2006. She was an adjunct instructor of graphic design from 2000 to 2006. Before she began teaching, she worked in Marketing Communications at the Capstone for nineteen years, including as art director, graphic designer and illustrator. With more than thirty years experience in the field of graphic design, she has won numerous local, regional and national graphic design awards, as well as had students win many awards under her guidance (Loupe spring 2014). In 2016, Lineberry won two AAF Tuscaloosa’s Silver ADDYs: for work completed for UA’s Alumni Magazine and her role in the updated Branding Architecture for UA. Laura Lineberry is a board member of several civic organizations and charities including Sister Cities International, Easter Seals of West Alabama, and Friends of Drish. She is faculty advisor for the Honors College student-run publication Mosaic Magazine.