As part our 70th anniversary commemoration of the Bachelor of Fine Arts degree, we are recognizing some of our alumni who have received the degree. Stories and images from 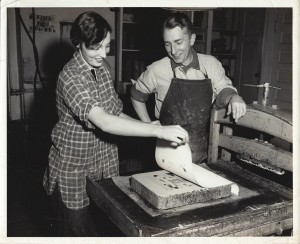 Barbara Pennington (BFA 1955, MA 1957) dedicated her life to painting and art education until her death in 2013. From teaching art therapy to Bryce Hospital patients to her provocative paintings of the Civil Rights Movement to her later intensely colored abstract works, Pennington always expressed compassion for humanity through her art.

Pennington grew up in Tuscaloosa and attended Tuscaloosa High School. She won a four-year full scholarship to UA from the National Scholastic Art Awards and received her BFA and MA in painting and printmaking. After graduation, she taught in public schools in Alabama, lived in New York from 1960 and then moved to Connecticut in 1968 where her high school students received many state art awards. In 1977 she returned to Alabama and set up her studio and an antique business in Gordo. Pennington was a member of the Crossroads Arts Alliance, a group of artists in and around Gordo that included the late Glenn House, Sr. (BFA 1957).

In 1957, while working on her master’s degree, the Tuscaloosa News ran a story on April 23 about her work teaching art to Bryce Hospital patients “44 hours a week.” Pennington’s Bryce students mirrored widespread attitudes about abstract and non-figurative art at the time: “At first they thought it was ridiculous,” she said in the interview, “and now they won’t do anything else.” The article explained the students’ change of heart: “With abstract art, they paint emotionally rather than technically and therefore are not imposed upon by the restrictions of realistic art.” Later her writing about her own work revealed a similar approach for herself, “My aim is for the work to be experienced in an unconscious way, bypassing the analytical and going straight to pure feeling—to a sense of beauty and joy.”

Abstract art was Pennington’s purview and her preference. However, a few times, she felt strongly enough about her subject to change her nonfigurative approach. When she passed away at the age of 81, she left behind a studio full of paintings and a legacy that has become more than she ever imagined. After Pennington’s death, her niece, Vicki Moreland, and Moreland’s husband found previously unknown and rare figurative works by the artist. The largest painting, Selma, 9 feet wide by 6 feet high, has become well regarded in the short time since the Mint Museum in Charlotte, North Carolina, announced its acquisition of the work. 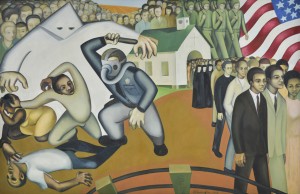 While living in New York City in the 1960s, Pennington made at least three figurative paintings about the tumultuous and horrifying events going on in Alabama during that time. In Selma, painted after the 1965 voting rights marches, she contrasted the solemn demonstrators emerging from a church with the violent police beatings of citizens in the streets and a giant, ghostlike Ku Klux Klan figure menacing over all. The painting’s monumental size and the stylization of its figures enhances its iconic character. Pennington painted a slightly smaller canvas, Riot, about five feet wide, after the Watts Riots in Los Angeles that occurred just a few months later. At the time, they were the worst race riots the country had ever experienced. She also made an abstract painting titled Selma March and at least one drawing after a bombing in Birmingham.

Recently, we exchanged emails with Pennington’s niece, Vicki Moreland, a freelance writer and the executor of Pennington’s estate. This is an excerpt from our questions and her responses in which she says more about her aunt’s art:

loupe: Do you know if [your aunt] was making abstract work at the [same] time that she painted Selma and the painting, Riot?  Did she change to a figurative style because that was the best way she found to express her ideas; or was she painting in that style and changed to abstract later on? Have you ever found any other figurative works from that same time?

moreland: There are a few other figurative works from that time frame, such as the self-portrait on her website, but she worked primarily in abstract before Selma and Riot. My mother [Pennington’s sister] and I believe that Selma was painted first and Riot later. I also know that she did an abstract representation, Selma March. That painting was found in New York and [was] believed to be rent payment for an apartment she had there. It is distinctly different from Selma and Riot. I can’t speak to the reasons she chose a figurative style for these paintings, but I suspect it was the best way to clearly represent her feelings on the subject. In the ‘70s she started painting impressionistic landscapes inspired by her travels to the Southwest and Midwest, her garden, and the landscapes of Alabama. But she returned to abstracts in the ‘80s with a series of mixed media works, watercolors (her Earth Auras), oils and oil pastels. I believe in time she began to prefer abstract to other styles because it allowed her to express freely her feelings about art.

loupe: Have you ever found any writing by Barbara about her early paintings? Did she ever talk to you about her feelings about the Civil Rights Movement?

moreland: Unfortunately, I don’t have any writing by her about her early paintings, nor did she ever talk to me about the Civil Rights Movement. I have heard from others though that to discuss her painting Selma was sometimes a somber experience. She also talked about the Freedom Riders, and I believe these events saddened her. I have a rough sketch she did entitled Birmingham Bombing, of a cross, buried in the rubble of the church, and a body on the ground. I do not believe that she ever painted this scene. We did discuss Riot and she commented that subconsciously she created the buildings without windows or doors and believed it to be a commentary on the lack of opportunity for the young men in the painting. They were “trapped” figuratively and literally on the campus. —RD