UA’s art alumni live and work around the globe. The spring issue of The Loupe features stories of our alumni making their way in the world. 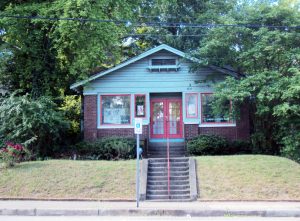 Paperworkers Local (PWL) is an artist co-operative in Birmingham started by two of UA’s Department of Art and Art History alumni, Roger Jones (MFA 2012) and Michael Merry (BFA 2008). Artist co-ops are one way artists can share the expenses of making art, such as studios, equipment, work areas, exhibition space and other resources. Their name alludes to trade union organizations that support specialized trade’s workers, focuses on works on paper, the many varieties of printmaking and soon, photography. They now have facilities for copperplate and zinc plate engraving, Solarplate etching, screen printing, lithography and relief printmaking. Merry said that an analog photography darkroom is very close to being finished, adding, “I’ll probably tackle that this summer.” 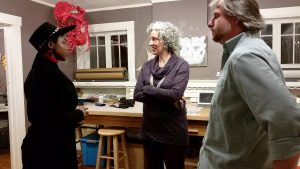 The co-op has 13 members, but includes non-members in its annual exhibitions. Jones explained, “All of our members play very different, yet equally important, roles. Some members handle finances, others handle printing press maintenance, social media and PR, reception coordination, exhibition coordination and installation and strategic planning. Our membership has doubled since we opened our doors in 2013.” Two other members are also UA art alumni: Jill Hamrick England (BFA 2008) is a charter member and Joi West (2013 BFA, photography and digital media) recently joined.

Paperworkers Local’s regular events include the Wednesday Night Studio Night and a different exhibition every Third Friday, which is the neighborhood’s event night (The co-op is next door to Bare Hands Gallery and surrounded by Forest Park neighborhood galleries and other businesses). Their Annual Fall Salon includes invited artists as well as members and the Members’ Holiday Studio Sale features smaller work more in a “gifty” price range, says Michael Merry. PWL has also had member exhibitions off-site: at UAB, the Birmingham Public Library, as well as Lowe Mill Arts & Entertainment in Huntsville.

Good ideas seem to flow through the cosmic consciousness until they manifest where they are needed. In the summer of 2013, Jones and Merry decided to start an artist co-operative focusing on printmaking and works on paper. Michael Merry had returned to Alabama after graduate school at the University of Delaware with the idea of starting an artist group to organize exhibitions and other events. He called Roger Jones, who had also been envisioning something similar as he was graduating. They talked and that was the beginning of Paperworkers Local. As the group comes into its their third full year, The Loupe asked the two co-founders how they got started and what their plans for the future are. Jones and Merry emailed us their responses to our questions, following, edited for space. 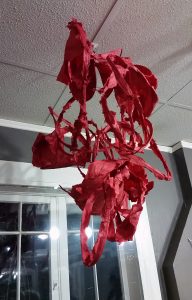 We asked about some of the obstacles and the support they have encountered. Merry answered, “Before going to grad school I had been entering juried shows and sending my work off to other cities, which is what I thought I was supposed to be doing. It would feel good to have work selected to be in those shows, but they were always far away and it was kinda like being pen-pals with the art world.” While Merry worked on his MFA at the University of Delaware, a friend organized an art association that inspired Merry and later provided a model for Paperworkers Local. Merry described the work of his friend as “very focused on the here and now and very D.I.Y. He’s not waiting around for someone to open a gallery and find him.” Merry himself was able to curate shows there, exhibit in the area and network.

During the same time, Merry and his wife returned periodically to Alabama for family visits. They felt that the state was changing and becoming more welcoming to artists. And increasingly, artists were moving to Birmingham or staying in the area instead of moving away. When it came time to move, Merry and his wife thought of several reasons why they would be happiest in Birmingham, at least temporarily, “So we decided to return to Birmingham, but only until something else panned out.”

Merry also knew he wanted to create a space like the art association his friend founded in Delaware. And, he wanted to do printmaking, but the expensive equipment required a joint venture of some sort. “I was not going to go back to being pen-pals with my career. So, I started to think about what I could do that would emulate what [his friend had done in Delaware.]”

During his last semester of grad school Merry contacted Roger Jones, whom Merry had known in school at UA. Jones wrote, “I also had plans to move back to Birmingham and was interested in co-founding an artist-run space. Michael and I discussed how difficult it is for printmakers to maintain access to printing presses after [the artists] leave a university setting and that a co-op would be a promising organizational model to pursue.” Merry added, “We decided that [Roger] should be the exhibition person and I should be the print shop person. We started looking at other local print shops around the country and contacting them for advice. [We found] a great deal on one printing press and borrowed some money from my dad for another. Roger and I started contacting Birmingham artists and figuring out who was interested.” 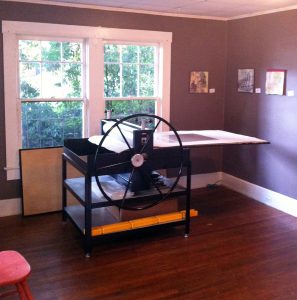 The first big obstacle they encountered was securing a location. As artists, they didn’t always find a sympathetic ear with realtors. Merry said he and Jones also discovered that Alabama tax laws encourage landlords to leave space empty rather than renting to people embarked on a new business venture, especially one as unusual and risky as an artist co-operative.

“Our first lucky break was that a local artist named Charles Buchanan had organized an impressive printmaking exhibition in Birmingham the previous year. Most of the participants were still interacting via Facebook as the Birmingham Printmakers’ group,” said Merry. He and Jones started meeting regularly with these artists at Forstall Art Center and the Forstalls and others helped spread the word. Artist John DeMotte loaned them a press. And printmaking professors from area schools supported them, too, explained Merry: “Arts faculty in the area were very helpful with everything from advice, to networking connections to donations, especially Sarah Marshall at UA, Doug Baulos at UAB and Scott Stephens at Montevallo.”

Their second break was meeting banker-turned-artist Mimi Boston. She had been thinking of starting a print shop with friends. She had professional connections in Birmingham and knew how to run a business as well. Boston now runs the day-to-day business end of Paperworkers Local. “Essentially, we were able to open the co-op because she has a name and her word means something [in the Birmingham business world],” Merry explained, “I’m sure we wouldn’t have figured out how to keep it open without her.” 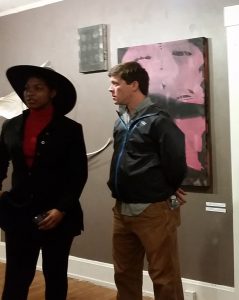 In 2012, PWL members agreed that they wanted to create – beyond an artist work and exhibition space – a social space that could, in its own artistic way, contribute to breaking down racial and other types of segregation in Birmingham. “We’ve shown work by African American artists and those have actually been our most successful shows,” Merry said, adding, “Aside from having a diverse group of members I don’t think we’ve been able to accomplish much where Birmingham’s segregation is concerned. I still believe that once we become more stable we would be wrong not to develop some worthwhile programming that gets more people involved and makes art a bigger part of more people’s lives.”

Both Jones and Merry feel hopeful about Paperworkers Local’s future. “We’re doing well on the exhibitions, showing good work at the shop and getting our work out into other arts spaces,” wrote Merry. “We’re networking with other groups and individuals in the region…And our shop has become something of a social space centered around people’s interest in art. It seems like people are coming to our events less because it’s something to do and more because they know we’ll be showing something good and because there will be interesting people there.” Merry went on, “Our immediate goal is really just to become more stable and to offer more workshops, which are a lot harder to pull together than any of us ever thought. But, if more people know how to make prints then we’ll have more members.” [Loupe sp2016]