Tuscaloosa, Ala. – UA Instructor and alumnus Jamey Grimes’ sculpture will be in sync with the 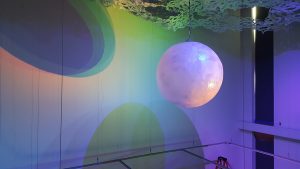 first total solar eclipse in a century on Monday, August 21, 2017. The New Gallery at Austin Peay State University, at Clarksville, Tenn., which sits in the path of Monday’s highly anticipated astronomical event, will feature Grimes’ sculpture, Eclipse, as their inaugural exhibition beginning August 19. The first of two previews will be on Saturday, August 19 (4-6 pm) and a second will be on the day of the eclipse itself, Monday, August 21 (9 am-4 pm). The exhibition, which is supported by the Austin Peay State University Center of Excellence for the Creative Arts and the APSU Department of Art + Design, officially opens August 28 and runs through September 21.

A Celebration of Space – The idea of space as a part of art was the idea from the beginning. APSU director of galleries Michael Dickins said, “With the first exhibition in the new gallery space in the new Art + Design building, I began thinking about space as a primary art element. I wanted to bring in an artist whose work deals with the transformation of space and was instantly reminded of Jamey’s work. Upon initial conversations, we realized the schedule would coincide with the upcoming solar eclipse, and then the word ‘space’ took on a secondary meaning. Jamey has created an installation specifically for The New Gallery and the historic solar eclipse. This contemporary art exhibition will celebrate space in a way that will transform the viewer’s conception of what a traditional gallery space is to what it could be.” 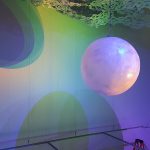 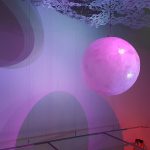 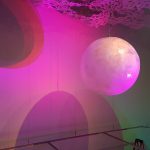 Jamey Grimes described more about his work and the installation: “This exhibit explores combinations of objects and light that build on previous work. The inclusion of a large fiberglass sphere is definitely a shift in my work, and I’m excited to see many elements come together as a response to the eclipse. The New Gallery is an expansive space, and I am honored to be the first artist to have a chance to experiment there. It’s a great opportunity to be on Austin Peay’s campus during the eclipse, as they are coordinating with NASA to host a large number of visitors. I’m hoping that many will also visit the gallery – luckily we’ll still be open even if the real eclipse gets rained out!” 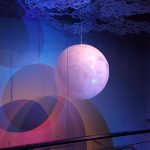 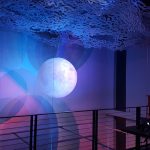 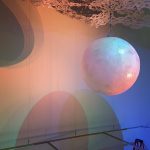 Jamey Grimes is a full-time instructor for the UA Department of Art and Art History where he has taught courses in 2D and 3D design, drawing, sculpture and 3D Design Engineering. He is a co-founder and workshop provider for UA Makerspace. Since 2009, he has also taught drawing courses through Auburn University’s Alabama Prison Arts + Education Project. Grimes has shown his artwork widely throughout the US, including exhibitions at Kendall Galleries (Grand Rapids, Mich.), Dunedin Fine Art Center (Fla.), Delaware Center for the Contemporary Arts (Wilmington, Del.), Urban Institute for Contemporary Arts (Grand Rapids, Mich.), Sculpture Key West (Fla.) and FAT Village (Ft. Lauderdale, Fla.) and Whitespace Gallery (Atlanta, Ga.). He is a former Alabama State Council on the Visual Arts Fellowship recipient, and the Arts Council of Tuscaloosa named him the 2014 Visual Arts Educator of the Year.

Go to our website for more information about UA’s Department of Art and Art History degree programs.