In medieval art, it is rare to know the name of an artist, but the names of the clergy who managed payment for construction projects 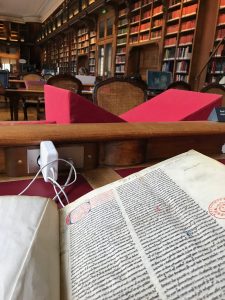 are often in the records. Thanks to a UA College Academy of Research, Scholarship, and Creative Activity (CARSCA) grant, this past June, Assistant Professor Dr. Jennifer Feltman traveled to Paris and Amiens, France, to study the books read and written by the clergy of the Cathedral of Amiens for a new project that proposes a way to understand how sculptural programs were designed. 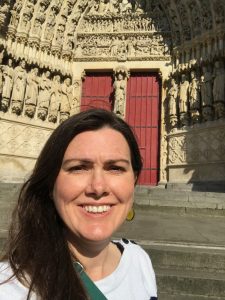 “I primarily consulted twelfth- and early-thirteenth century biblical manuscripts, but also some sermons and commentary—all of these manuscripts are unillustrated, which may seem a strange source for an art historian. But I was studying them not only for their textual context, but also for the layout of text and commentary on each folio. Bibles of the twelfth century were often organized into columns with a main text and commentary in the margins. It is my supposition that the façade of Amiens preserves a pattern of thought, shaped by the layout of texts; it also brings together a variety of texts available in the cathedral library. So, while sculptures certainly aren’t the same as a manuscript of the Bible, they might be called a stone Biblia, using the original sense of the word for Bible—a collection of texts.”

Dr. Feltman is currently completing a book manuscript, Moral Theology and the Cathedral: Sculptures of the Last Judgment in Thirteenth-Century France. The book illuminates the ways in which Parisian moral theology was disseminated through clerical networks across the dioceses of France and made visible in sculptural programs at the cathedrals of Chartres, Paris, Reims and Amiens. With the support of the NEH, she has developed a companion website: Portals of the Last Judgment – Chartres, Paris, Reims, Amiens.