A BRIEF HISTORY AND RESOURCE PAGE

An article in the January 19, 2012, CW on one of the Alabama Biennial sculptures encouraged me to post some information on and photos of the respected juried exhibition that “quickly gained a reputation as an important outdoor sculpture exhibition in the South.” http://www.flickr.com/photos/uaart/sets/72157607358107464/

The very first year of the Biennial, 1991, when the marble statues making up Be Gardiner’s work, Icarus and the Guardian Angels, won one of two purchase prizes, Dean of Arts and Sciences James Yarbrough designated the purchased works throughout campus “The University of Alabama’s permanent outdoor collection.” 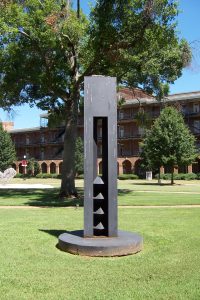 In 1995 (its third exhibition), Yarbrough wrote in that year’s catalog that the endowment for the Biennial was established “in order to exhibit and acquire sculpture of heroic proportions for the University.”

In its first two years (1991 and 1993), the competition was coordinated by the “vision and considerable professional skill” of Art Oakes, now professor emeritus of sculpture. Because of Oakes’ efforts, the competitive Alabama Biennial “quickly gained a reputation as an important outdoor sculpture exhibition in the South.” In year three, Oakes was honored for his efforts and a purchase prize named for him. http://www.flickr.com/photos/uaart/2867820911/

Be Gardiner’s Angels and Flanary’s Wagon were both vandalized at different times. In 1991, the 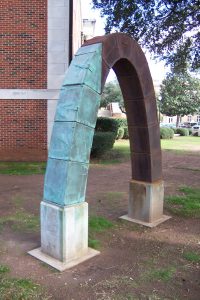 According to this 2012 Crimson White article, Andrew Arvanetes’ Phoenix probably should not have been displayed outside.