(Tuscaloosa, Ala.) The Arts Council of Tuscaloosa will host an exhibit of works by UA art alumna and local artist Deborah Hughes at the 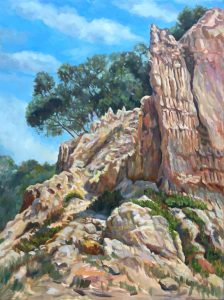 Hughes’ recent experience as curator of themed shows at the University Medical Center prompted her to start looking for a unifying theme in her own work. “I noticed that rocks played a prominent role in many of my paintings. The seeds of this exhibit were sown on the coast of Southern Calif. and further took root during a trip to the Canadian Rockies,” said the artist. While painting on location her work is foremost about being there, direct observation, and a visual dialog with her chosen environment. “Rocks are the subject, the focus, the anchor or an important part of the underlying compositions included in this exhibit,” said Hughes.

Deborah Hughes’ path in art started early in Meridian, Miss. and has taken twists and turns throughout her career. Her influences range from weekly lessons with abstract expressionist Eloise McLellan during her youth to her studies at the Art Department at The University of Alabama during the ‘golden sunset’ of the Little Bo, Woods Quad era. She received a BFA in painting and experienced an eclectic mix of professors including Al Sella, Howard Goodson and Richard Brough. It was in sculpture with Art Oakes that she thoroughly received the directive to break down any previously held idea about “what art is.” Hughes then attended Florida State to pursue an MFA in painting with her graduate show consisting of mixed media sculpture installations. 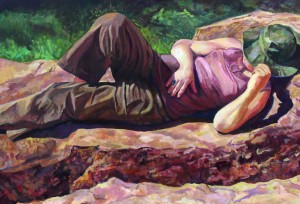 While in Florida she worked as an illustrator of children’s books and had a two-year residency as a visual artist with The Fine Arts Council of Florida. She returned to Alabama to fill a position as assistant professor of art at the University of West Alabama and later became Art Director of Educational Media for The University of Alabama in Tuscaloosa. Her experience with the University was rich and varied, including the design of award winning theatre and dance posters, magazines, web design and interactive media. Painting has always been a constant, but Deborah’s love of collecting, combining and manipulating found objects has been a reoccurring theme.

After leaving UA in 2002, she went directly to California for 5 months. Her 2003 show at the Kentuck Gallery, titled “Five Months in Carpinteria,” represented her experience as a landscape painter during her sojourn. While there, she became a founding member of SCAPE (Southern California Artists Painting the Environment) and participated in classes and workshops lead by prominent area artists including Michael Drury, John Comer and Marcia Burtt. Thus Plein Air painting, which has almost a cult following, has captured her imagination for the last decade.

In Tuscaloosa, one-woman shows include The Kentuck Gallery, The Arts Council’s Junior League Gallery, The University of Alabama Ferguson Center Gallery and the University Medical Center. In the fall of 2011, her paintings were featured in two one-woman Tuscaloosa shows titled “Wanderings” and “Every Bloomin’ Thing.” Around Alabama her work has been in The Energen Show, Wonders of Alabama Art and The Alabama Wildlife Federations’ Flora and Fauna show. In the fall of 2012 her work was featured in a show at The Birmingham Botanical Gardens titled “Down the Garden Path, and to the Water’s Edge”.

The Dinah Washington Cultural Arts Center is located at 620 Greensboro Avenue in downtown Tuscaloosa. For more information about The Arts Council, Bama Theatre or CAC, patrons should LIKE the Facebook page “The Arts Council – Bama Theatre – Cultural Arts Center” and follow tuscarts on Twitter. Call 205-758-5195 or visit tuscarts.org for further information.