BFA senior Jocelyn Licwinko was awarded a scholarship grant for almost $12,000 (15,000 Canadian dollars) from the Elizabeth Greenshields Foundation. Licwinko is earning a Bachelor of Fine Arts degee in studio art with concentrations in painting and printmaking and a minor in German.

The Elizabeth Greenshields Foundation, based in Canada, has awarded funds to more than 2,000 students and artists from 80 countries since its inception, according to the website. Artists can apply and be awarded the grant three times throughout their life.

Licwinko, whose hometown is West Chester, Pennsylvania, explained that she would use a small percentage of the total for art supplies for her thesis exhibition this spring. “The remainder,” she said, “will go towards my tuition, which is very helpful since I am an out-of-state student.” 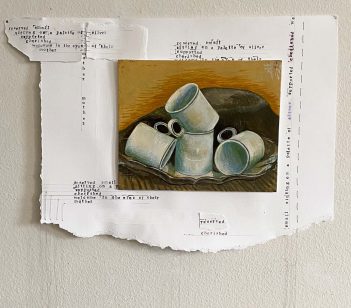 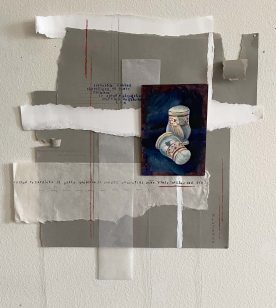 Licwinko said that the application process required a budget plan, artistic proposal, artist statement, a letter of recommendation and six high-quality images of her work. She used artwork that she completed in spring 2021 for ART 416, Advanced Painting Seminar, with Professor Jason Guynes.

While Licwinko worked through the requirements for her major, she also found a student job in the Sarah Moody Gallery of Art for three years, where she has been a gallery guard and had other responsibilities, such as help change exhibitions. “I would love to be a curator or have my own gallery one day,” she said, so she has been looking for preparator and curatorial assistant positions after she graduates and is thinking of going to school for museum studies or conservation. But, she also doesn’t want to stop making art. “I plan on getting my Master of Fine Arts degree, but I want to go when I feel ready as an artist and not feel pressured.”

Applying for a grant can be a big step, especially for a young artist still in school. Licwinko discovered the grant as part of an assignment in ART 498, the BFA Studio Capstone course, an interdisciplinary course that represents the culmination of the BFA studio art program at The University of Alabama. Focusing on issues pertaining to professional practices, this course is designed to assist students as they leave the university and prepare for the next step in their education and/or in their lives as professional artists.

“For me,” she added, “I always find it difficult to promote myself and my art for fear of the criticism I could potentially receive. I think what stuck with me is that everyone starts somewhere. With that mentality, I decided that I should strive for something more, rather than hold myself back in fear.”

For information about The University of Alabama’s programs in studio art and art history, visit our Degree Programs page.