Tuscaloosa – The Sarah Moody Gallery of Art is pleased to present its Farley Moody Galbraith Endowed Exhibition for 2019, an exhibition of prints by internationally acclaimed artist Julie Mehretu. Excavations: The Prints of Julie Mehretu opens January 24 and runs through March 8, 2019. The public is invited to the opening reception for the exhibition, Thursday, Jan. 24, from 5:00 to 7:00 p.m. in 103 Garland Hall. In addition, Cole Rogers, artistic director and master printer at Highpoint Editions, one of the printers who has worked collaboratively with Mehretu, will give a gallery talk on January 30 at 3:00 p.m. in 103 Garland Hall.

Considered one of the most important artists working today, Julie Mehretu is known for large-scale paintings, drawings and prints that mix elements of urban landscape with personal, energetic iconography. Mehretu sees her work as an investigation of identity and its links to community, power and place. She combines found imagery with free gesture to place current and historical events in a new, unfamiliar context.

Mehretu’s exploration of printmaking, the focus of this exhibition, includes intaglio, chine collé, screenprinting and lithography. She has completed collaborative projects at professional printmaking studios across America, among them Highpoint Editions in Minneapolis, Crown Point Press in San Francisco, Gemini G.E.L. in Los Angeles and Derrière L’Etoile Studios and Burnet Editions in New York City.

Cole Rogers, master printer and artistic director of Highpoint Center for Printmaking, says of the body of work, “Excavations is a comprehensive exhibition of Julie Mehretu’s prints created with four publishers across the United States between 2000 and 2007. The exhibition showcases Mehretu’s artistic progression in this seven-year span, illustrating the importance of print as a medium to her artistic practice.”

Mehretu was recently the subject of a solo exhibition at the Serralves Museum of Contemporary Art, Porto, Portugal that traveled to the Fundación Botín, Santander, Spain, A Universal History of Everything and Nothing. In 2017, the San Francisco Museum of Modern Art unveiled a monumental painting of Mehretu’s in two parts, HOWL, eon (I,II), 2017, which was commissioned by the museum for a three year installation in its main entrance lobby. The Los Angeles County Museum of Art will open a comprehensive mid-career survey of her work in November of 2019, which will travel to the Whitney Museum of American Art, New York, the High Museum of Art, Atlanta and the Walker Art Center, Minneapolis. Mehretu has participated in numerous international exhibitions and biennials including her most recent solo exhibition of prints and paintings; Julie Mehretu; SEXTANT at White Cube, London (2018). 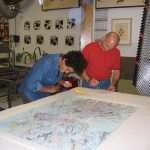 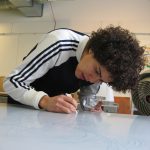 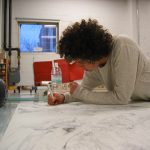 Mehretu was born in 1970 in Addis Ababa, Ethiopia and divides her time between New York and Berlin.  She came to the United States at the age of seven, growing up in East Lansing, Michigan, where she received her BA from Kalamazoo College and her MFA degree from the Rhode Island School of Design. Her work has received international recognition, including the American Art Award from the Whitney Museum of American Art and the prestigious MacArthur Fellows Award. In 2015 she was awarded the US Department of State Medal of Arts Award. Mehretu’s global representative is Marian Goodman Gallery.

The Sarah Moody Gallery of Art is supported by The University of Alabama College of Arts and Sciences and the Department of Art and Art History. For further information, contact the gallery at 348-1891 or go to our website: https://art.ua.edu/venue/sarah-moody-gallery-of-art/.

Garland Hall is a five-minute walk from the Campus Drive Parking Deck and Bus Hub on Hackberry Lane. Public buses also transport visitors from the Bus Hub to Gorgas Library, directly across from Garland Hall. Directions via Google Maps are here: https://bit.ly/BusHub2Garland.

For more information about The University of Alabama’s programs in studio art and art history, go to this page.