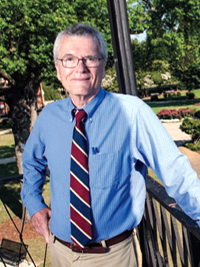 Dr. Robert O. Mellown, now associate professor emeritus, returned to his alma mater to join the department in 1971, where he taught nineteenth-century art and architecture, Renaissance art, and Ancient art until he retired in 2012. During the summer of 2018, he taught an OLLI course, “An Insider’s View of 40 Years of Historic Preservation and Restoration in Tuscaloosa,” in which he gave students “a behind-the-scenes look at the dirty and sometimes dangerous work involved with rescuing and restoring old buildings.”

A select bibliography of works by Robert Oliver Mellown

Mellown has written extensively on art and architecture for many publications including Alabama Heritage and The Alabama Review. He is the author of the richly illustrated The University of Alabama – A Guide to the Campus and Its Architecture, published by the University of Alabama Press. He is a contributor to the Society of Architectural Historians’ Archipedia online encyclopedia and a consultant for Discovering Alabama’s Bicentennial special: State Capitals. Mellown served as project director and principal investigator for numerous historical and architectural investigations of Alabama’s landmark structures, including the Historic Structures Report for Bryce Hospital.

Robert Mellown serves on a number of community and state committees. He is a lifetime member of the Tuscaloosa Preservation Society and a founding board member of the Jemison-Van de Graaff Mansion Foundation. He was a member of the Bryce Hospital Historical Committee which was formed by the Alabama Department of Mental Health and The University of Alabama to insure the preservation of the integrity of the historic structure. He is a member of the Tuscaloosa Bicentennial Committee and a consultant for the Alabama Bicentennial Commission. Mellown is listed in the UA Experts Directory on the subjects of art, art history and University of Alabama architecture.