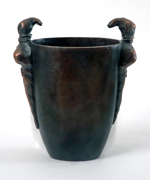 August 19 – September 23 2010
Reception: Thursday, August 19 6:00-8:00 P.M.
Flickr Photos of exhibition.
DeMonte is an artist, teacher, curator and collector of works in various media which reflect women’s issues, global community and social awareness. “For the last thirty years my work has dealt with the roles of women in contemporary societies…and the concept of beauty in our global culture. These works are heavily influenced by my Italian Catholic background and interest in and collection of folk art.” DeMonte’s work has been featured in numerous national and international exhibitions. Her work is in the collections of the Brooklyn Museum, Corcoran Gallery of Art, and New Orleans Museum of Art, among others. This exhibition will travel to Nordstrand Gallery, Wayne State University, NE; Mobile Museum of Art, AL; Katzen Center for the Arts, American University, Washington, D.C. and Heffernon Gallery, West Valley Art Museum, Surprise, AZ.
Above: “Artifact: Calyx”, 2007, cast bronze, courtesy June Kelly Gallery, New York.
To download a pdf file of installation shots of the exhibit by William T. Dooley, click here. 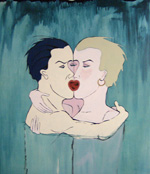 October 7 – November 5 2010
Lecture by the artist, Thursday, Oct. 7, 6:00 p.m.
205 Smith Hall
Lester Van Winkle is an exceptional teacher and mentor who taught sculpture at Virginia Commonwealth University (VCU) in Richmond for more than three decades. He joined the School of the Arts at VCU in 1969, nurturing its Department of Sculpture into a nationally recognized program. Van Winkle has received prestigious commissions in Richmond, Virginia, and two fellowships from the National Endowment for the Arts. His works are in numerous public and private collections, including the Fine Arts Museum of Mobile, Alabama; the National Collection of American Arts, Washington, DC; and the Louise Bourgeois collection, New York. See images from Van Winkle’s lecture and exhibition reception on Flickr. To download a pdf file of installation shots of the exhibit by William T. Dooley, click here. 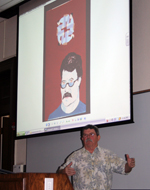 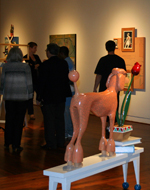 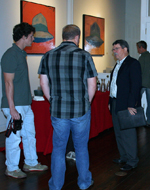 To the Mountaintop: Tim Rollins and K.O.S. 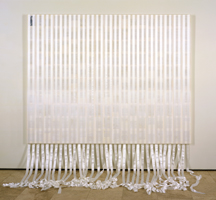 November 11 – December 17 2010
In August 1981, art educator Tim Rollins was teaching art to middle-school students in the South Bronx. Three years later, he developed a curriculum that incorporated art-making with reading and writing for students who were classified as academically or emotionally “at risk.” The “Art and Knowledge Workshop” was launched with a group of students who called themselves K.O.S. (Kids of Survival). Over the last 25 years, Rollins and K.O.S. have produced paintings, prints, photographs, and sculpture based on literary texts such as Franz Kafka’s Amerika, Harriet Jacobs’ Incidents in the Life of a Slave Girl, William Shakespeare’s A Midsummer Night’s Dream, and musical scores, including Winterreise by Franz Schubert. The group has exhibited their creations widely in national and international venues. The work is represented in prestigious public and private collections including the Museum of Modern Art, the Hirshhorn Museum of Art, the Tate Gallery London, and the Smithsonian Museum of American Art. Works on loan for exhibition courtesy of Lehmann-Maupin Gallery, NY, and Tim Rollins & K.O.S.

Angelo Granata: A Survey of Sculpture and Works on Paper

The late Angelo “Jack” Granata (1922-2009) was a founding faculty member of UA’s Department of Art and Art History and professor of sculpture from 1949 until his retirement in 1988. Granata served as chair from 1968-1981 and saw the department through major curriculum and facilities enhancements. He served as director of the Sarah Moody Gallery of Art from 1967 until 1988. The department is proud to present this exhibit, which highlights his prolific output of sculpture and works on paper spanning 60 years. His sculpture has been exhibited in venues around the country including the Birmingham Museum of Art, the St. Louis Museum of Art and the Museum of Modern Art, New York. His work is in collections such as Georgetown College, KY; the Figge Art Museum, IA; and UA’s Sarah Moody Gallery of Art. He was a founding member of the Southern Sculptor’s Association. The exhibition was organized with the assistance of the Granata family. 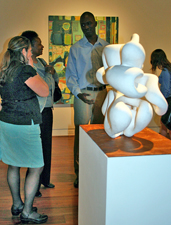 This second biennial exhibition features the work of these six Department of Art and Art History undergraduate studio art majors who have been awarded Windgate Fellowship support for the academic year 2010-2011. Department faculty members use a jury process to select students to conduct research and produce a new body of art work specifically for this show. Participating students are actively involved with the exhibit’s organization and production. The Windgate Fellowship provides funding support dedicated to both research and production costs. The exhibition is the centerpiece event for the 2011 Arty Party, a College of Arts and Sciences fundraiser organized by its Leadership Board. Flickr photo set.

The Sarah Moody Gallery of Art will feature artist William T. Wiley on April 6 as guest lecturer at 6 p.m. in 205 Smith Hall.  The gallery will open its 2011 Farley Moody Galbraith Endowed Exhibition William T. Wiley: Desperate Ours from 6-8 p.m. on Thursday, April 7. The gallery is honored to have works by William T. Wiley, an artist who has spent much of the last fifty years producing memorable works and influencing students and contemporaries alike.  This exhibition follows on the heels of a deserved retrospective set out in the Smithsonian American Art Museum in October 2009 and recently concluded at the Berkeley Art Museum and Pacific Film Archive, July 2010. Wiley’s works are infused with references to popular culture, art history and literature, walking the viewer through his personal ruminations and commentaries on current affairs. Wiley’s works appeared in the 1980 Venice Biennial and 1983 Whitney Biennial. He also has had major exhibitions at the San Francisco Museum of Modern Art , M.H. deYoung Museum, San Francisco (1996), and the Corcoran Gallery of Art, Washington, D.C. (2005). His recent awards include the 2004 John Simon Guggenheim Fellowship Award from the John Simon Guggenheim Memorial Foundation, New York and a 2005 Lifetime Achievement Award from the Southern Graphics International Conference in Washington, D.C .  Wiley has art works in the collections of the Belger Arts Center, Kansas City; the Art Institute of Chicago, The Museum of Modern Art, New York, the Whitney Museum of American Art, New York, the Corcoran Gallery of Art, Washington D.C., the San Francisco Museum of Modern Art, the Hirshhorn Museum and Sculpture Garden, Washington, D.C., the Los Angeles County Museum of Art, and the Museum of Fine Arts, Boston, MA, among many others. This exhibition was organized courtesy of the John and Maxine Belger Family Foundation and William T. Wiley. This exhibition is supported by the Farley Moody Galbraith Exhibition Fund.

The Sarah Moody Gallery of Art is supported by the College of Arts and Sciences and the Department of Art and Art History. It is open Monday through Friday from 9:00 am – 4:30 pm, and Thursday evening 5:00 – 8:00 pm. We are located at 103 Garland Hall in the heart of the UA campus on Woods Quad. There is no admission charge.

Become a Fan of the

A parking deck at the corner of Hackberry and Campus Drive (Campus Drive runs in front of Bryce Hospital) provides visitor parking at a nominal cost, and is only a five minute walk to Garland Hall. To reach Garland, exit the main doors of the deck and cross Hackberry south to Margaret Drive, which runs along the side of Smith Hall (the Natural History Museum) until you reach Capstone Drive, the main street which runs between Gorgas Library and Garland, Clark, and Manly Halls. Follow Capstone to Garland Hall and the Sarah Moody Gallery of Art. For more information call the gallery: (205) 348-1891 or go to http://fawp.ua.edu/bamaparking/regulations/.