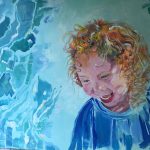 Janet Mego has been compelled to draw, paint and sculpt since the age of six. After earning 1st Place in a juried show and later receiving recognition for her early artistic endeavors in Baltimore, MD, she then chose to pursue the BFA in Art at The University of Alabama. Much of what the artist does has been influenced by the fine art of “learning to see,” implemented masterfully by those professors essential in taking her far beyond the face value of that degree. These influential mentors include Alvin Sella, Richard Zoellner and Arthur Oakes. 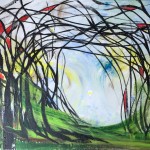 patron’s homes in several counties throughout Ala. Placing in juried shows and exhibitions concomitant with her tenure as Artist in Residence for the Sumter County Fine Arts Council in the 1980s and as adjunct art instructor for Livingston University (now The University of West Alabama), she continued to explore the intricacies of the human face and its expression of emotion. She felt a spiritual awareness of the beauty of nature transition into the watercolors that had become her favorite medium. Later, she rediscovered and applied the acrylic paints she used in college to canvas in a more abstracted interpretation of trees, water, sky and terrain. 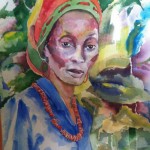 City Schools and Walker High School alumnus, Matt Dover. This painting commemorates two young alumni, soldiers who died in Iraq, and integrates a new dimension of awareness of contemporary theme with other aspects of her portraits. These two young men, one black, one white, went to school in the Deep South together, fought on the battlefield in the same war, and then died in ultimate sacrifice, joined together in death in every sense but the literal. Therefore, she has begun to explore underlying ethnic and multicultural elements in the faces she paints, and tries to emphasize that as Americans, we must not only develop ‘tolerance’ for, but celebration of those who may seem to possess in their physical demeanor a color wheel ‘different’ from ‘our own.’

The Junior League Gallery is open weekdays 9 a.m.-noon and 1-4 p.m. and also during Bama Theatre events. 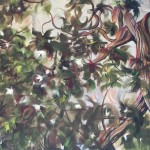