The University of Alabama has a large and growing collection of outdoor, public sculpture. Begun in the early 1990s with the Alabama Biennial, the most recent additions have been in the Woods Quad Sculpture Garden. Life-size bronze statues of our championship coaches, as well as fairy-tale-sized animal sculptures, are part of our campus-wide treasure trove. Browse more photos of the Alabama Biennial and UA Public Sculpture. 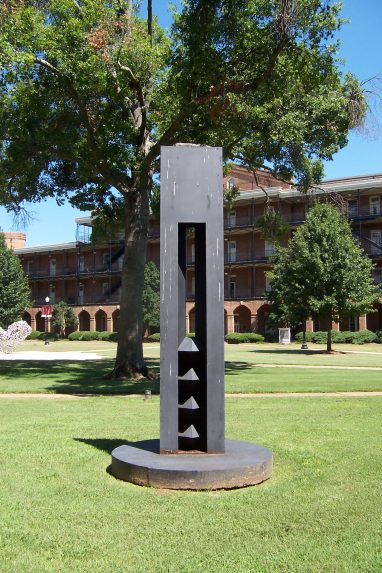 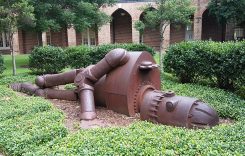 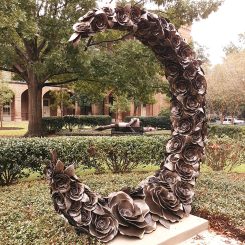 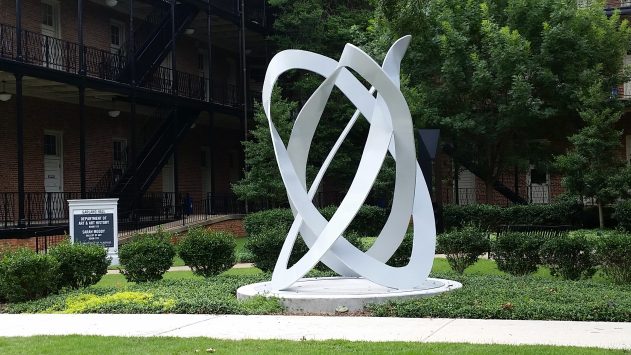 The Woods Quad Sculpture Garden has been growing for many years, but was officially dedicated in August 2014 by then-Dean Robert Olin. Currently, these sculptures occupy the quad grounds:

Ringo Lisko’s Flourish located on the east side of the quad’s center, is the newest sculpture here, unveiled in November of 2021. Flourish is the first sculpture in the McMahon-Pleiad Public Art Trail, a collaborative sculpture initiative between UA, UAB and UAH, funded by the UA System Board of Trustees’ McMahon-Pleiad prize. Lisko is a 2020 BFA major in sculpture and drawing and now works at UA as foundry specialist.

Billy Lee’s Homage to Brancusi, the oldest sculpture here, was the purchase award winner for the 1993 Alabama Biennial. Located in the southeast corner of the quad, in the “crook” of Garland Hall, it measures approx. 12 ft. x 28 1/2 in. x 15 in of painted steel (not counting the base). This work is part of the Smithsonian Institution‘s Save Our Sculpture project.

Craig Wedderspoon‘s Riverstone, 2012, 54 x 54 x 54″, cast bronze, stands at the southwest corner of the quad at Presidents Hall. It was part of the UA Faculty Biennial Exhibition in 2012. Wedderspoon is professor of sculpture at UA.

The center of the sculpture garden is currently occupied by Craig Wedderspoon’s Quilted Vessel made from aluminum, with variable dimensions, over six feet in height. Quilted Vessel is the third in the series of rotating sculptures here. This piece is the largest in a sculpture group exhibited in a solo exhibition by Wedderspoon at the Birmingham Museum of Art 2013-2015.

Mobius and Borromean Rings by Paget Kern was installed in the summer of 2018. Kern, an art minor, designed the work to link two complex mathematical ideas together in a massive sculptural example. Read more about Kern’s sculpture here.

The Alabama Biennial was a sculpture competition and exhibition that took place on The University of Alabama campus in the years 1991, 1993, and 1995. The juried competition invited sculptors “to exhibit portraits of mythological and historical characters and memorialize the spirit of the age in which the subject lived.”

The very first year of the Biennial, 1991, when the marble statues making up Be Gardiner’s work, Icarus and the Guardian Angels, won one of two purchase prizes, then-Dean James Yarbrough designated the purchased works throughout campus “The University of Alabama’s permanent outdoor collection.”

In 1995 (its third exhibition), Yarbrough wrote in that year’s catalog that the endowment for the Biennial was established “in order to exhibit and acquire sculpture of heroic proportions for the University.”

In the first two years, the competition was coordinated by the “vision and considerable professional skill” of Art Oakes, now professor emeritus of sculpture. Because of his efforts the Alabama Biennial “quickly gained a reputation as an important outdoor sculpture exhibition in the South.” In year three, Oakes was honored for his efforts and a purchase prize named for him.

The five works still on campus — by artists Andrew Arvanetes, George Beasley, Peter Flanary, Be Gardiner, and Billy Lee — won purchase awards and became part of UA’s permanent outdoor collection. Please visit our Flickr set on the Alabama Biennial and go to Flickr’s map to find each piece’s location on The University of Alabama campus.

Be Gardiner’s Angels and Flanary’s Wagon were both vandalized at different times. In 1991, the New York Times ran an article about the significant damage to Gardiner’s work just a few days after it was installed. Peter Flanary’s piece was vandalized three times in 2004. In the spring 2008 issue of our newsletter, The Loupe, we focused on public art and the danger of vandalism.

CDRC Sculpture Garden “on the hill”

Internationally acclaimed sculptor Frank Fleming, a UA alumnus who received his MFA in art in 1973, was commissioned by the College of Human Environmental Sciences to create larger-than-life bronze beasts for a sculpture garden at the Child Development Research Center on Peter Bryce Boulevard. His creations — Peter the Rabbit, John the Turtle, Frank the Frog, and three ducks named Milla, Judy and Amy — were donated by UA alumna Margaret E. Rhoads in honor of her late husband, John L. Rhoads. Our Flickr collection of photos of the sculptures at the CDRC.

For more information about the UA Department of Art and Art History and its programs, visit our Degree Programs page or contact the department at (205) 348-5967.

Information about visitor parking is available on the UA parking services website. Parking is free on campus in a legal space after business hours. For more information, contact the gallery at (205) 345-3038.