Sometimes there’s just no substitute for seeing the object you are studying first hand. 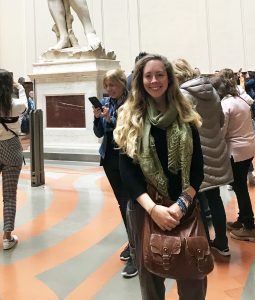 For more than three semesters, from a graduate seminar in medieval cathedrals, to intensive thesis research, art history graduate student Rebecca Teague has focused on the sculpture programs of three 12th-century cathedrals in three small towns in northern Italy. She has written her master’s thesis on the cathedral facades designed by the sculptor Niccolò in Verona, Piacenza and Ferrara.

Teague’s research focuses on what may have shaped the iconography of the programs, especially local influences. “My thesis looks at some of the large-scale political issues going on at the time of the cathedral was built, filtered through a local lens,” she said. “Why, for example, was a less common historical figure or saint chosen over one more commonly used? You have to delve into what the local people valued, what the local culture was like at the time. So, not only do sources for some of this imagery come from farther afield, such as the Lateran in Rome, but there are similar examples of the imagery at sites nearby.”

Last May, Teague got a chance to see the cathedrals up close and in context during a study-abroad trip with the Department of Art and Art History. She was able to visit Rome, Florence and Venice with the group and served as a teaching assistant to Dr. Tanja Jones, who is also Teague’s thesis advisor. After the main part of the trip was over, Teague and Jones made a side trip to Verona to view in person the sculptured doorways of the cathedrals at Verona, and nearby Piacenza and Ferrara. 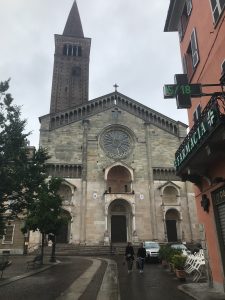 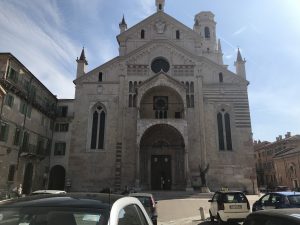 Teague made her home base in Verona for four days. Each day she would work on one of the cathedral sculpture programs. She traveled to each town to experience the space, take photos and make notes about details that particularly struck her as she viewed the work up close. To get to Ferrara, for example, she traveled by train, which took a little over an hour. Once there, she explained, “I would spend the rest of the morning taking photos of the cathedral all the way around.” After lunch, she returned to the cathedral square to take more photographs. “I would look at the interior and take photos of the architectural plans that nearly every church displays in the crypt. I would also often take a walk in the area surrounding the church and make notes about nearby buildings. Then I would check to see if the same buildings were around during the time period that the cathedral was being built.”

Getting to see the buildings and their sculptures up close, and to explore the town around the cathedrals, some of which existed in the 12th century, helped Teague visualize what they were like 900 years ago. She said, “I devoted all my time to the actual experience of the space,” and saved researching sources for when she was back in the US. This fall, Teague still sounded in awe of the scale of the architecture she was able to see: “I got a sense of how weathered they are, how large they are, their sense of power.” 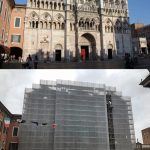 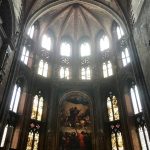 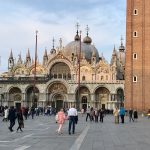 Rebecca Teague received the BA in psychology at Auburn University at Montgomery before being accepted in the MA program in art history at The University of Alabama, where she was awarded a teaching assistantship for three years. In 2017, she was awarded a mid-year Academic Merit Scholarship from the Joseph and Carolyn Bolt Endowed Support Fund in Art History. At the 22nd Annual Graduate Student Symposium in Art History, she won second place for the Harrison Award for Excellence in Research – Graduate Paper Presentation for her paper, “Nanni di Banco’s St Luke as a Statement Against Albizzi Control.” After defending her thesis, “Carving Politics: Niccolò’s Façades at Piacenza, Ferrara, and Verona Cathedrals,” Teague will graduate in December and take time off before she continues her studies in a doctoral program. [fall18] 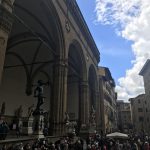 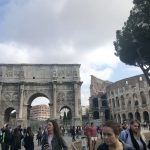 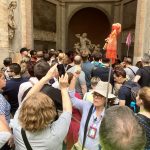