Mark Barry received his MFA in painting in 2014. Before he came to UA, he had a career in advertising and graphic design. Now he teaches in the UA College of Communications. We asked him to tell us a bit about his history and about what he is doing now. 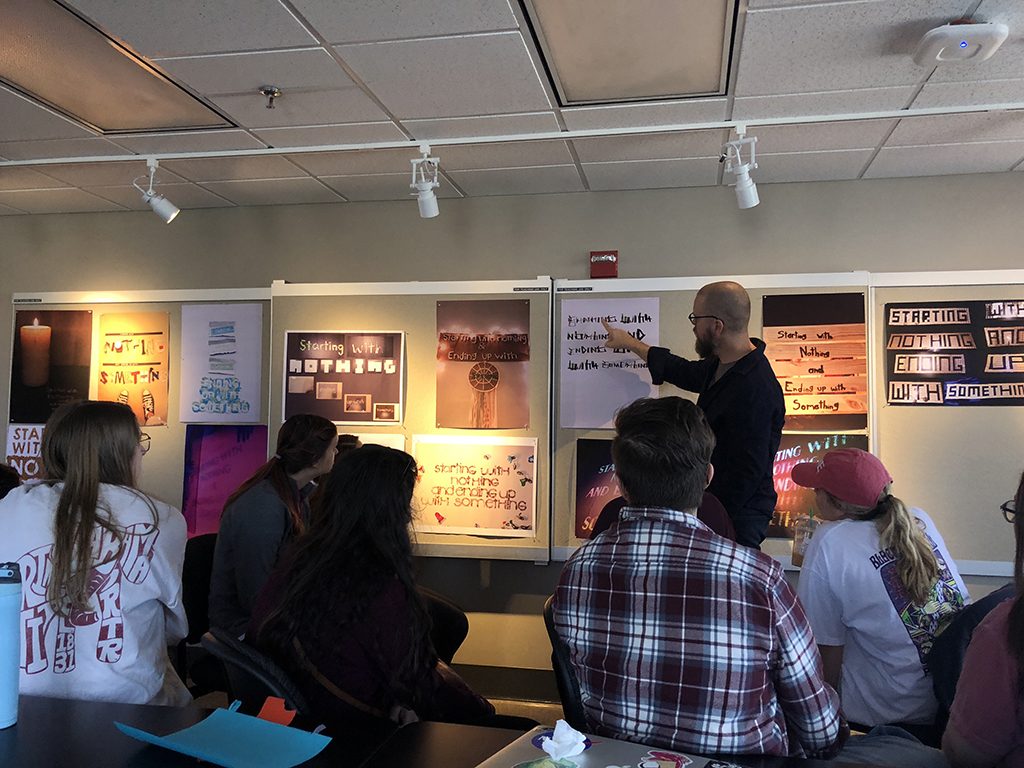 I graduated from Sam Houston State University with a BFA in Advertising and Graphic Design. Somehow, I was lucky enough to land a gig as a summer intern in the Houston office of J. Walter Thompson. Just over a year later, I was an Art Director in their New York office. After a few years there, my wife and I moved to Salt Lake City, where I bounced around a few places before opening up my own agency, Subata Corp. Six years later I was considering graduate school. When I was diagnosed with multiple sclerosis in 2011, I decided it was the right time. Again, luck was on my side and I was accepted to the MFA program in studio art at The University of Alabama.

For the past few years you’ve been teaching, first as a GTA and then as an adjunct instructor in Art and Art History, then you were hired as full time instructor in the Advertising and Public Relations Department in the College of Communications. Recently you’ve been made Director of the Creative Specialization in Advertising program for A+PR. Will you describe a little more about that?

Yes. While in grad school, I fell in love with teaching, but I was also missing advertising. So when a position for a full-time instructor in A+PR opened up I applied. I’ve been full-time with A+PR for three years. And yes, I’ve recently become the Director of Minerva, the Advertising Creative Specialization. It’s an undergraduate specialization focused on developing Art Directors and Copywriters for the creative advertising industry. Admission is through a competitive creative application process that happens during the second half of the Spring semesters. Upon acceptance into the program, students then take specialized courses within A+PR such as Concepting, Art Direction and Copywriting seminars, and portfolio development classes. The program began just three years ago but is already off to a great start. Our students have won multiple awards for their creativity and we were ranked 12th among creative advertising programs by The One Club in New York in a recent international survey.

Are you helping students emphasize the creative side of advertising projects?

Yes, we’re focused on the creative side of the ad business. Generally speaking, a passion for some sort of creative endeavor outside of advertising is a common and celebrated theme among many of the students in Minerva. However, I personally believe the most important personality trait of student that wants to thrive in the program is a strong work ethic. Hard work beats talent almost every time.

Earlier, you said you fell in love with teaching…

Actually, teaching was never even on my radar before graduate school. It really was a bit of a surprise. Watching light bulbs turn on over a student’s head is a really wonderful thing. And being in a position to help flip the switch is pretty exciting to me.

You’ve been in consulting for a long time. Do you think consulting skills can lead to or work hand in hand with teaching skills?

Actually, I haven’t considered this until just now, but I suppose consulting as a creative has given me some of the basic teaching fundamentals. Because much of what we do is so unexpected—after all, that’s a fundamental element to real creativity—there is often a lot of client education that has to happen in order for the best work to ever see the light of day. Clients often know what they want or think they need, but the job of a creative is to discover unexpected and engaging answers to what is usually a relatively mundane business challenge. In that regard, perhaps there is a link between how I approach my creative consulting projects and how I teach.

How did graduate school make a difference for you?

I think the biggest thing graduate school taught me was to consider why I make the creative decisions I do. It’s so easy to just keep moving forward that I never really took time to think about the process itself as being part of the finished result. Graduate school helped me slow down, which may seem like a bad thing in a deadline driven industry like advertising. But it really has improved my overall abilities as a creative thinker and maker. Sometimes the good stuff just needs to marinate a bit.

How will you be teaching your students what they need to know?

My classes are all about the work. The word “work” in that last sentence refers to both the product produced as well as the time and effort required to produce it. I expect a lot from the students and they usually step up and deliver. Of course they do, right? Because as creatives, the work is the best part. It’s a blast. The alternative is switch their majors to accounting.

My art making practice has taught me the awesome power of failure. I encourage failure. Not laziness, but a giant fireball of effort and exploration.

Is there any advice you would give to prospective students?

To anyone considering the arts, my advice would be: of course, you should do it. Creativity, whether for personal or professional reasons adds value to the world. Without it, we’re all stuck.

Alumni, we’d love to hear from you. Send your news to rachel.dobson@ua.edu or go to this page: https://art.ua.edu/alumni/.