In 1973, FRANK FLEMING earned his MFA from the Department of Art and Art History. 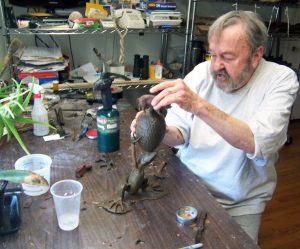 For the last 40 years, Fleming has made his living creating sculptures in porcelain, bronze and other mediums that have captured the imagination of the world. This article grew out of personal memories and a recent conversation between the editor and the artist. —Rachel Dobson (republished from The Loupe, Spring 2014)

I have a vivid memory of walking into the old ceramics room in Woods Hall in the summer of 1974 and being welcomed by an oddly elegant unglazed porcelain television set (the type that now seems old-fashioned, with a curved glass screen), topped by colorless, but very detailed carrot antennae and a pale baby doll’s head. The sculpture was by new MFA graduate Frank Fleming who was teaching classes here as an instructor. Little did he know, he would soon make a grand entrance onto the national and international art scene and embark on a wildly successful career making more of those surreal sculptures. Thanks to my mother, who was taking studio art classes that summer, I got to meet Fleming, and have kept in touch with him over the years.

In March, I asked him about the porcelain television set and the beginning of his career: “What you saw was part of the vast, vast body of work, the ‘carrot storm,’” Fleming told me. He had been furiously making work for his first solo exhibition at the Birmingham Museum of Art, a show he always informally referred to as “The Great Carrot Storm of 1937,” the last of several Birmingham exhibitions he entered just before he gained national attention. Influenced by Robert Arneson, David Gilhooly and other Funk artists, he was making bisque porcelain pieces, depicting carrots, baby dolls and everyday objects juxtaposed with motifs from nature. They were fanciful and funky, surreal and metaphysical. 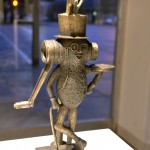 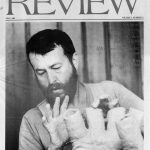 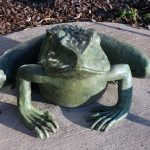 In 1973 and 1974, Fleming submitted work to the Birmingham Museum of Art’s juried exhibitions and won the Craft Award in 1974. The juror for one of the shows was Arne Glimcher, respected art dealer and founder of Pace Gallery in New York. Fleming said, “[Glimcher] not only chose my piece for the award, he bought some of my work!” He felt that Glimcher’s early recognition of him helped propel him to success.

Before Fleming earned his MFA, however, he had to face his graduate committee, including Dick Zoellner and Jack Granata, who were less than enamored with the funky sculpture that blew my teenage mind. Fleming told me what has become a legend: Granata suggested he make something different and Fleming knew what style of art would meet his professor’s, and his committee’s, approval. He went to his studio and made what he described as a large mound of rocks (maybe in the Minimalist or Earth Art traditions), piled them up for his committee, and earned his degree. Then he went back to making the work for which he has become famous. 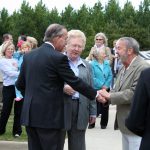 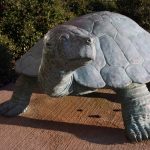 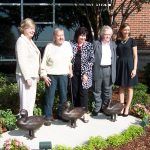 Fleming is known for his relentless work ethic and he has a massive body of art work to show for it, internationally and locally. The Birmingham Museum has his work in their collection and in 1990 took on the conservation and care of his most famous local sculpture, The Storyteller fountain at Birmingham’s Five Points South. Sculptures are located at several other sites around the city, including a giant chess set he created for the historic Swann Castle. In Tuscaloosa, on UA’s campus, there are three fairytale-sized bronze animals at the Child Development Research Center sculpture garden and works in the Sarah Moody Gallery of Art Permanent Collection (including Mr. Peanut Sculpture with Golden Egg, from the Morgan Collection, shown earlier this year). But at age 73 — 40 years since I first met him — Fleming sounds almost apologetic for wanting to slow down, just a bit, and take it a little easier. “I completed five big commissions this last year,” he adds, as if feeling the need to justify his occasional escapes down to the Gulf.

Recognition for his hard work and creativity comes more and more often. Garden & Gun, a magazine of high-end Southern culture, ran an interview of Fleming by Tulane journalism professor Vanessa Gregory in their February/March issue. A University of Montevallo student and a UAB film graduate have made a documentary film about him and hope to submit it to Birmingham’s Sidewalk Film Festival. This follows a delightful Alabama Public Television video, Animal, Vegetable, Mineral: The Art of Frank Fleming, made in 2000 by Carolyn Hales.

For all the accolades and the hints about slowing down, Fleming really doesn’t seem to be letting up. After many years, he still takes time to teach teachers how to sculpt animals in a workshop at the annual Alabama Teacher’s Institute. He keeps a room to repair sculptures that patrons bring back to him, some decades old. In fact, since the Garden & Gun article, he has had new inquiries for large commissions. I hope he’ll be able to slip down to the beach every once in a while, but clearly, the world is always looking forward to seeing new Frank Fleming’s sculptures, fanciful, funky and more!

Frank Fleming in the Encyclopedia of Alabama