When a couple of Crimson White editors heard about Professor 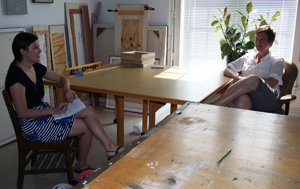 Westmoreland (PA) Art Nationals Juried Exhibition, it made sense to assign CW Lifestyles Editor Stephanie Brumfield to the story. Brumfield had taken Shineman’s ART 316 painting course, so she felt pretty comfortable asking questions of her former teacher. In fact, Brumfield is getting to be an old hand at interviewing artists. She spent last year at the UA student newspaper interviewing “a lot more artists than I anticipated.” Among others, she has talked to and written about Kentuck artists Kerry Kennedy (UA MFA, ceramics) and Steve Davis, former McNair Scholar Patricia Davis (BFA 2010) and artist and Renaissance Gallery owner Ann Stickney. Interviewing so many artists inspired her to take more art courses and to declare a double major in art history and English. Brumfield said she went for the job at the Crimson White after she visited Southern Living and decided she wanted to try magazine work to combine writing and her visual interests. She hopes this CW job will help her find a position in publications after she graduates in 2012. To read Brumfield’s interview with Shineman, go to http://cw.ua.edu/2011/06/15/ westmoreland-art-exhibition-recognizes-professor/.

Editor’s update, 7/14/2017: Stephanie Brumfield Kirkland is now Director of College Relations for UA’s College of Arts and Sciences. This story first appeared in the summer 2011 issue of The Loupe.