Bill Dooley, associate professor of art and director of the Sarah Moody Gallery of Art and Emily Bibb, collections manager for The Paul R. Jones Collection of American Art at The University of Alabama, spent a few hours one afternoon recently hanging a new art work, Cassandra by Benjamin Smith, in the foyer of Morgan Hall. 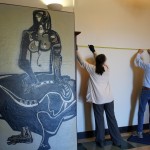 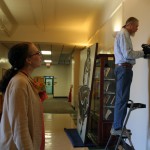 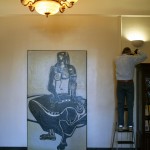 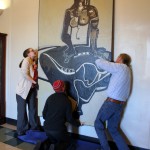 An unusual example of a wood block print on paper by Smith, who was born in 1941, the framed piece is 97 inches (8 feet, 1 inch) high and 56 ½ inches (4 feet, 8 inches) wide. Recorded as a block print, on closer inspection, it has been painted over, possibly with printing ink on paper, and then mounted on wood. Smith is an Atlanta area artist whose work Paul R. Jones purchased probably just after Smith created it. The artist went on to teach at the Savannah College of Art and Design, according to Bibb. Paul Jones purchased many works by up-and-coming and unknown artists during his several decades of gatheringone of the largest and most comprehensive collections of 20th-century African American art in the world. Jones gave the collection to the University in 2008, with the stipulation that it be used for education and shared with the community. 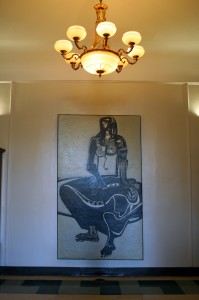 One of the first things a visitor notices is the scale of the image and its striking presence. Collections manager Emily Bibb said that Smith is known for his exceptionally large and detailed prints. Bibb remarked, “This one in particular is well over life size, and due to the bold lines and strong contrasts of the works, it is very arresting when a viewer first interacts with the work.”

The work is probably named for the Cassandra of Greek mythology, who was doomed by Apollo to predict the future accurately but never to be believed. Bibb commented that this image of Cassandra “is somewhat of an enigma. Her face doesn’t convey much emotion, and her posture is very straight and still, allowing the viewer to enter a contemplative conversation with the piece, noticing the areas of greater intricacy, the swirling lines of one of her feet, the almost topographical detailing of a hand. She’s a subject that can be returned to again and again, which is wonderful for such a large public space, where people may not have time for a single prolonged examination of the work.” 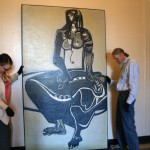 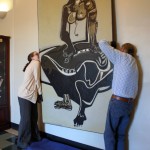 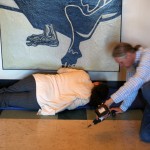 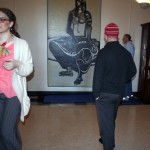 Cassandra replaces an oil on canvas portrait of Senator John Tyler Morgan, a six-term U.S. senator for whom Morgan Hall was named. Morgan, who had been a general in the Confederate States Army during the American Civil War and a Grand Dragon of the Ku Klux Klan during Reconstruction, “was notable in two arenas of American politics, foreign policy and race relations.”

Since the 1960s, Morgan’s portrait (painted about 1900) hung inside Morgan Auditorium and later in the front foyer of the building. According to information found in Acumen, the digital platform of W.S. Hoole Special Collections, before that time the painting hung in Amelia Gayle Gorgas Library. The painting was moved in mid December from the foyer of Morgan to W.S. Hoole Special Collections after a discussion between the Dean of the College of Arts and Sciences and the Department of English, which is housed in Morgan Hall. The space will become one of periodically rotating exhibitions of works from the Paul R. Jones Collection.

When asked why the Morgan portrait was exchanged with a work from the Paul R. Jones collection, Bibb explained that Mr. Jones wanted to ensure that parts of the collection “would be on view for the people of Alabama in perpetuity, and that the collection would be used for education. Mr. Jones felt that artwork could inspire not only individual emotions, but social interactions and needed conversations about difficult topics. While those conversations can take place in a dedicated space like an art gallery or a controlled environment like a classroom, I hope that bringing Cassandra to Morgan Hall will also allow people to interact with not only the art, but emotions and each other in a more spontaneous and casual fashion. Just please, no touching.”

The Paul R. Jones Collection of American Art at The University of Alabama

John Tyler Morgan in the Encyclopedia of Alabama

View the photos in a Flickr.com slideshow