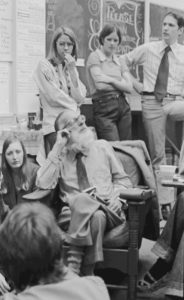 A good part of the spring 2013 issue of The Loupe was given over to the alumni of Professor Gay Burke’s photography classes. Many of Burke’s old students sent us reminiscences and thank-yous to a teacher who, for forty years, has given her students so much. One of the contributions was this essay by current UNA professor of art Wayne Sides. Sides was an early graduate of UA’s New College, concentrating in photography. During one of his classes with Burke, she brought in two legendary photographers, Walker Evans and William Christenberry (BFA 1958, MA 1959), to talk to her class. They were touring Evans’ old photographic sites in Hale County. Thankfully, Sides took a photo of the three influential photographers together among the students, and contributed it along with his thoughts on Burke’s influence on Southern photography (reprinted below). He went on to make some photo history on his own, and now teaches at the University of North Alabama, in Florence.

I enrolled at The University of Alabama in 1972. I chose the school because there was only one school in Alabama that taught photography in the art department. Jim Barnes was my first teacher, however he resigned shortly thereafter. Gay was hired as his replacement. To me, it was as if what Jim Barnes started, Gay continued and ultimately perfected.

One of the most memorable experiences from my years as a student was the day I walked into the classroom and Walker Evans was there, sitting on the old couch. Next to him, seated on the dusty side chair was William Christenberry. Christenberry had invited Evans to tour the campus before returning to some of the sites of his historic photo series from Hale County. The experience of meeting and talking with Evans changed my life. I credit Gay with making that interaction possible. After meeting Evans, Gay was invited by him to work with him and his students at Yale. This, too, is a testament to her brilliance as an artist and teacher.

As a teacher, Gay was exceptional at cutting to the truth and sharing insights that challenged her students. She used absolute honesty when talking about a student’s work. She not only taught the craft of photography, but also pushed her students to develop the intent and meaning behind their work. In critique, students discovered more about themselves as people through the process of examining their art. Besides teaching us the dynamics and history of photography as an art form, she also gave us a lot of confidence and challenged us in unique ways.

Gay gave me the education and the experience to become the teacher I am today. In many ways, I owe my career to her. After graduating from The University of Alabama, I was an artist-in-residence with the Alabama State Council on the Arts (ASCA) for five years. After some time, Gay was the one who challenged me to become a teacher. I applied to Pratt Institute and was accepted. I was so afraid that I would be looked at as ignorant and inadequate and someone who knew nothing about art or photography. However, not only was I prepared, but I was offered a graduate assistantship. Some years later, when I was living in Paris, Gay somehow was able to send word to me about a job opening at University of North Alabama. On her recommendation I was offered the position. Twenty-five years later, I am still teaching there.

I believe it was a great stroke of luck, genius and incredible foresight on the part of The University of Alabama to hire Gay. In many ways she is responsible for bringing art photography to Alabama and raising the profile of photography as an art form throughout the South. She is the “Mother of Alabama Art Photography.” 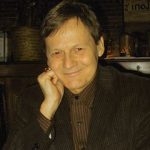