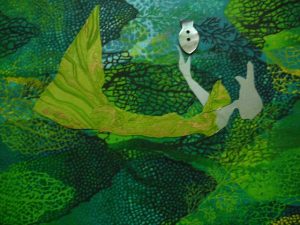 Artist and UA art alumna Linda Rae Bell died at her home in Northport, Monday, June 20, 2017. Bell earned her MA in art history from The University of Alabama and she served on the staff in the Department of Art and Art History as slide curator in the 1990s, overseeing a collection of over 75,000 slides and other image resources.

Bell received bachelor’s and master’s degrees from The University of Alabama. She was the first graduate from the new joint program in art history between UA and UAB in 1993. Her master’s thesis was titled “The Music Lesson in Seventeenth-Century Dutch Genre Painting.”

Bell, who worked under the name “Elles Beles,” specialized in textile art. Much of her graceful, sensual art was created in fabric collage inspired by music and musicians, fairytales (traditional and her own), 1920s and ’30s fashion and other themes. Recent exhibitions were at the Bama Theatre’s Greensboro Room Gallery, the Jemison-Van De Graaff Mansion and the Mildred Westervelt Warner Transportation Museum in Tuscaloosa; Lowe Mill Arts and Entertainment in Huntsville and the Daniel Day Gallery in Birmingham, a music and art venue. In 2015, she presented a body of work at the Warner Transportation Museum, Aquatic Gardens: Travels through the Imagination, interpreting watery narratives including Alabama rivers with subjects such as Cahaba lilies and mythical underwater creatures. 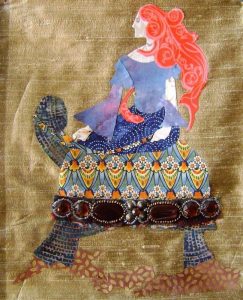 The artist’s statement on her exhibition at Lowe Mill:

“Moving Enchantments – The Breath of Southern Spirits is the most recent series of my work. The inspirations grew from a project by Walter Parks whose musical history of the Okefenokee Swamp produced images of cypress trees, reflective waters, wildlife indigenous to the area and the people who lived there. After experiencing his performance, I began to think of the swamp as an enchanted place. This evolved into a succession of works that include images of Walter playing songs from his Swamp by Chandelier project, various swamp related scenes, and illustrations from a personal fairytale of a young girl who lived in the swamp.” – Linda Bell, 2017

In lieu of flowers, her family suggests that donations be made to the American Diabetes Association. Her obituary is posted here.