During a summer 2017 art residency at Áras Éanna on Inis Oírr, the smallest of the Aran Islands 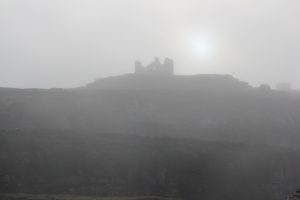 off the coast of County Galway, Ireland, Assistant Professor Jane Cassidy learned that sometimes making art takes – not just a village – but an entire island. Along with working on her own art projects that involve light, Cassidy took an interesting side trip that led off on a rewarding adventure.

“The people of Inis Oírr are immensely steeped in their language, their history, culture and music,” Cassidy said, “When some locals got wind that I made light art, they asked if would I light up their castle, which of course, I was overjoyed at the stellar suggestion!” So, a side project of Cassidy’s work during her residency was projection mapping of her own images onto one of the island’s most distinctive landmarks and highest points – 600-year-old O’Brien’s Castle, which is surrounded by a stone-age fort. This involved scanning the surface of the building with special software, then applying designs and animations made especially for the castle. Then, late one night, she gathered up her equipment – a MacBook Pro and projector – and invited some of her new friends from the island to hike up to the point to test the projections on the ruin’s irregular stone surface. 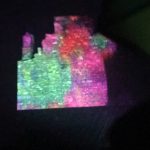 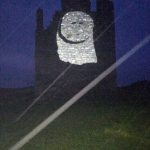 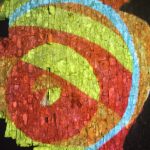 There are only 260 people who live year-round on Inis Oírr and Cassidy said many of them responded: “People started coming up the hill from the village and a car drove over from the other side of the island to see what the craic was. We were getting phone calls and great feedback from the people a mile away telling me what colors were working well, what patterns they could see and, ‘is that a rocket?!'”

After the positive reception, Cassidy promised to return to the island in December, for the Winter Solstice, to again project on the castle. On this occasion, she worked with the local secondary school to make a new projection. She asked the students (ages 11 to 18) to draw multi-colored mandalas inspired by the sun. Then she animated the designs, interspersed them with her own animations, and prepared them for projecting. 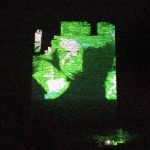 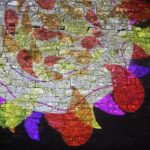 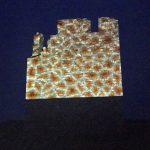 Despite intense fog during the day, all the islanders encouraged Cassidy to go ahead with the projection that night. After sunset on the longest night of the year (4:20 p.m.), Cassidy projected the colorful designs high up on the castle’s rough-hewn stones. Despite some wild Atlantic rain whipping at them and with the help of the residency director, a farmer, a fisherman and other friends, the projection mapping was a huge success. Cassidy said, “On an island so small, it became a community project – if it wasn’t for all the participation of the locals, it would never have come to pass.”

To read more about Assistant Professor Cassidy’s art, go to her website. For more information about the UA Department of Art and Art History programs, visit this page: https://art.ua.edu/academics/.