“UA has some of the best research opportunities for undergraduates,” Nadia DelMedico declared confidently in a recent interview. And she should know.

DelMedico is a graduate student in art history at UA now, and research, particularly computer-based, has been her guiding light since high school. Research was the reason she came to UA. Before she became an undergraduate art history major (2019), DelMedico initially considered UA because a family friend was an alumnus. But the California native developed a real interest in coming to Alabama when she realized the research and scholarship opportunities here. She had focused on schools in the Northeast and the Ivy League, but changed her mind when she became a finalist for the Randall Research Scholars Program (formerly Computer-based Honors) and visited campus. “When I was accepted to the Randall Research Scholars Program, I knew UA was the place for me,” she said. 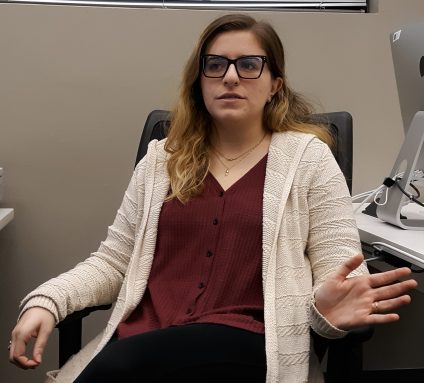 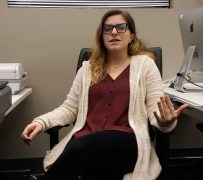 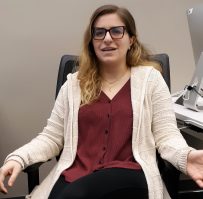 DelMedico began her Alabama adventure as a biology major with a minor in art history, doing her research as a Randall Scholar in biology. But after a few semesters, she changed tack. In the fall of 2016, the first (and only) semester she didn’t take an art history course, she admitted, “[I] really missed being in an art history class.” So, in the spring, she enrolled in art history courses with Dr. Stephens and Dr. Tanja Jones. As a Randall Research Scholar, however, she still needed to be involved in research. “Dr. Stephens spoke so passionately about her research projects on the first day of class that I immediately was interested in her work.” American art historian Dr. Stephens told DelMedico about the research project she was developing on enslaved people at The University of Alabama, and DelMedico began looking into the existing slave dwellings on the antebellum campus under the guidance of Dr. Stephens.

DelMedico presented her preliminary research in 2017 at the undergraduate poster session during the 22nd Annual Graduate Student Symposium in Art History. For her poster presentation, “Too Close to Home: A Visual History of Slavery on The University of Alabama Campus,” she was awarded second place in the Harrison Prizes for Excellence in Undergraduate Research. With further research, she won third place in the Arts & Humanities category at the Undergraduate Research and Creative Activity Conference (URCA) at UA. 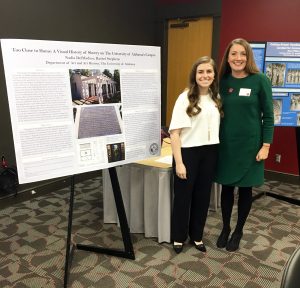 That fall, she and Stephens co-presented their research on UA’s second president Basil Manly during a national symposium, “Universities, Slavery, Public Memory, and the Built Landscape,” sponsored by the University of Virginia and the Slave Dwelling Project. DelMedico’s and Stephens’ paper, “Slavery and its Built Environment at The University of Alabama as Revealed in the Basil Manly Diaries,” discussed typical activities of university administrators, faculty and students as seen through the daily writings of the second president of UA. DelMedico was the only undergraduate to present at the conference.

For her work on the history of slavery on the UA campus, DelMedico was awarded the Randall Outstanding Undergraduate Research Award during Honors Day ceremonies in 2018.

In the meantime, while she was still an undergrad, DelMedico also had begun working at the Alabama Digital Humanities Center. The ADHC had advertised for a graduate student, but she applied anyway. Probably in part because of the computing experience she had gained through the Randall Research Scholars Program, DelMedico speculates, she was was offered the job.

Now as a graduate student, she has an assistantship with the Center.

“We are always balancing a number of different projects,” DelMedico explained. She has just begun a project to create a database of women artists working in Early Modern courts with art historians Dr. Tanja Jones and Dr. Doris Sung. “While Dr. Jones and Dr. Sung are still in the grant-writing phase, my supervisor, Dr. Anne Ladyem McDivitt (Digital Humanities Librarian), and I have been planning out the website. Once the faculty secure funding, I’m hoping to continue working on the project as they begin to transfer their existing data to the site.”

For a project titled “Spanish in the Digital Age,” in conjunction with a 400-level Spanish course, DelMedico has been beta-testing the website for the project and creating instructional documents on SoundCite, a program which allows her to add audio clips to text, and Hypothes.is, open-source software which she uses to annotate the text.

Working at the ADHC, DelMedico believes, helped her make the transition from scientific to humanities research. “It showed me how a lot of the same principles can apply and guided me in establishing my own research habits according to best practices.”

When DelMedico is not working in the Digital Humanities center, she’s immersed in graduate studies. She recently co-curated “Public Charge”: Diasporic Immigrant Artists, with her fellow students in Dr. Wendy Castenell’s ARH 490/550, at the Paul R. Jones Museum.

DelMedico is continuing her research on the history of slavery on UA campus. She is writing a paper that focuses on the lasting impact of slavery on the student body, as well as collecting contemporary student perspectives regarding this history and current race relations on campus to present at the Southern Studies Conference in Montgomery at the end of January.

And, she also has begun exploring thesis topic ideas. Although DelMedico has researched the lives of enslaved people on UA campus, she isn’t sure if that is where she wants to focus. “While this is one of my areas of interest, I’m also very interested in studying cross-cultural artistic exchange and work created by immigrant and expat artists.”

DelMedico explained why she is drawn to art history research and hinted at its connections to her original field of science. “It’s a bit hard to put into words why I love art history,” she said, “but I think my favorite part of studying a work of art is that it feels like solving a puzzle. When you’re studying objects or images that are relatively unknown or haven’t received a lot of scholarly attention, you’re given the object or image, maybe an artist or date, and that’s it. You have to work from there to determine why the object was created, what its function was, what message it conveys, how it might have been received. You can glean so much about a time period or a society just from one work of art if you know what you’re looking for.”

For more information about the degree programs in the UA Department of Art and Art History, go to this page or contact the department at (205) 348-5967.