“The story of Africatown is one that all Alabamians should know. It is an amazing story of survival in the face of adversity,” April Livingston said when asked about why she feels her recent sculpting and casting project is so important. 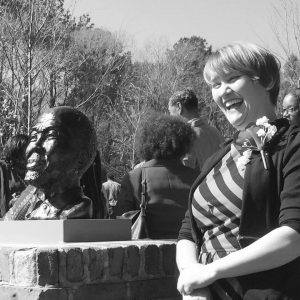 In February, MFA alumna April Livingston’s cast iron bust of the Africatown hero, Cudjoe Lewis, was unveiled in the courtyard of Union Missionary Baptist Church in Mobile. The sculpture is a memorial to Lewis and to the survivors of the last slave ship in the US. Livingston, who has been working on the bust, and accompanying plaques for more than a year, says she feels this is a way to educate more people about the survivors of the slave ship Clotilde and Lewis’ history.

Cudjoe Kazoola Lewis (ca. 1840-1935) was the longest living survivor of the Clotilde, the last recorded slave ship to dock in the United States. Lewis was part of a group of approximately 112 Africans captured and taken as slaves on the Clotilde about 1859. The ship sailed from the Dahomey Kingdom (the area of present-day Benin and Togo) in West Africa and arrived in Mobile, Alabama, on July 8, 1860 – illegally – 52 years after the US abolished international slave trade. Lewis helped found the settlement now known as Africatown, just north of Mobile. He served as a community leader, church sexton and historian for the survivors of the Clotilde. An earlier commemorative bust of Lewis was stolen several years ago and needed replacing. 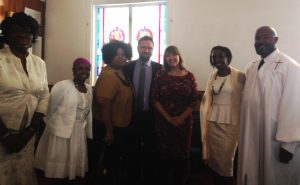 Last spring, April Livingston heard about the church’s need and looked into their story. She decided she wanted to help replace the sculpture and talked with church leaders. “Then I went to the congregation and got their permission.” She volunteered to take on the project, donating all her labor along with raising money for materials through an online GoFundMe campaign. The money raised covered materials and tools as well as travel for the casting trip to Indiana. The funds also covered a base and a bronze plaque with Lewis’ history.

With the church’s blessing, Livingston immediately began work. “I would sculpt the bust in the day and handle emails and the GoFundMe [work] in the evening,” she explained. Then preparations for the casting began in earnest. “When the bust was sculpted, I took the model to Fairhope Foundry and got my friend [and founder] Corey Swindle to make the [wax] molds.” Meanwhile, Livingston packed for the trip to Indiana where the casting would take place. She planned to make two busts, so they made two wax molds. “I took them to Indiana in coolers with ice-packs inside.” Besides the original bust for the church, a second bust will become part of the permanent collection at the Birmingham Civil Rights Institute. 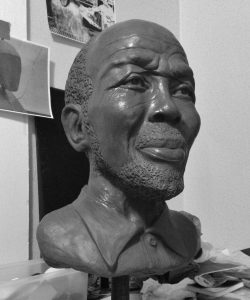 Costs of similar projects can run into the tens of thousands of dollars but Livingston and the organizers came up with a no-frills budget of $5000 to cover the basics and all of the labor was donated. The sandcasting at Sculpture Trails Museum and Foundry in Solsberry, Indiana, went smoothly, Livingston said. “I let [the molds] cool for a day and broke them out the next evening. It was amazing to see how well they both came out.” When she returned, there were a few more details to finish. She worked with one of the church members to construct “an un-steal-able base for the work” and a local sign company made plaque listing all the donors. 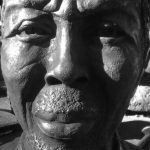 At the dedication in February, church members, many of whom are descendants of Cudjoe Lewis, presented Livingston with a plaque and flowers in thanks for her work. And she was able to meet more descendants of Cudjoe Lewis who came to the ceremony. “It was something to see so many who had his face. I really know that face.” When asked if this experience has changed her art, Livingston replied, “It has made me more aware of local history and has given me more motivation to use art to educate.” 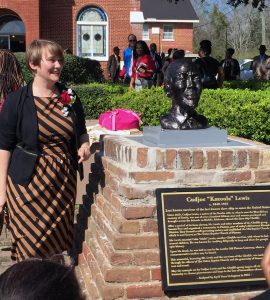 Mobile native April Livingston received the MFA in sculpture from UA in 2011. She is a working artist, activist and studio art and art history instructor at the University of Mobile. Livingston’s website is http://aprillivingston.com/home.html.