Tuscaloosa. — In the early days of the Civil Rights Movement in Alabama, when many establishment whites supported only token or incremental changes toward equal rights for African Americans, there were a few who took real risks to support the cause. At The University of Alabama, Dr. Theodore Klitzke, art department chair from 1959 to 1968, was a progressive risk taker who stood up for justice. 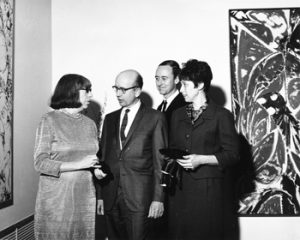 The year 1965 was pivotal for voting rights in Alabama and the United States. Activist Jimmy Lee Jackson was shot and killed by an Alabama State Trooper in Marion, Ala., on February 18, 1965, prompting civil rights leaders to call for the first of the Selma to Montgomery marches. Those marches led to the passing of the Voting Rights Act of 1965.

As Willita Zoellner, a UA art alumna and then wife of UA art professor Howard Goodson remembers, as soon as Klitzke heard about the shooting of Jimmy Lee Jackson and the organizing of the march, he headed with his family to Selma. According to author Earl Tilford in Turning the Tide: The University of Alabama in the 1960s, Klitzke, his wife and children all marched in a protest march in Selma on February 25. Zoellner herself rode down to Selma with the Klitzke family when they returned to Selma on March 6. They were part of the group of whites who were heckled and harassed by other whites –“a hostile and angry crowd” – as they marched to the Dallas County Courthouse – the “first such action by white persons,” according to the Tuscaloosa News (March 7, 1965). The group that included Klitzke, Dr. Ed Carlson, a UA physics professor and Dr. Frederick Kraus, professor of dentistry at UAB, called themselves Concerned White Citizens of Alabama and “included professors, businessmen, housewives, school teachers and other professional people,” from Huntsville, Birmingham, Montgomery, Tuscaloosa, Auburn and Tuskegee, according to the newspaper.

During his tenure at Alabama, Klitzke worked to bring renown artists and progressive art to the University and the surrounding community. In 1961, according to the Tuscaloosa News, during an exhibition of African sculpture and prints at historically black Stillman College as part of their annual Observation of Visual Arts, Klitzke was the featured speaker for the event. Although the newspaper does not go into detail, it is very possible that Klitzke, who had a background in curation, helped organize the exhibition, which traveled from New York to Alabama.

In 1967, Klitzke brought Lee Krasner – internationally known painter and widow of Jackson Pollock – to exhibit her work in the newly renovated Alabama Union Gallery in Garland Hall. Krasner’s exhibition in “the brand new Garland Gallery” even warranted a mention in the New York Times. While Krasner was here, Klitzke encouraged her to travel to the tiny town of Alberta in Wilcox County in the Black Belt to visit the newly formed Freedom Quilting Bee. The quilting cooperative had been initially sparked through the efforts of Reverend Francis Walter and his wife Betty Mitchell Walter, a graduate student in studio art who worked as gallery coordinator for Klitzke. Formed primarily to help the African Americans of the area – most descendants of enslaved people – improve their economic situation, the quilters were creating the first quilts that would go on to become world famous. Krasner brought some of those quilts home with her to New York and helped spread the word about the Freedom Quilting Bee cooperative to the world.

Dr. Klitzke was an active member and leader in social justice organizations while living in Tuscaloosa. He served on the board of the Alabama ACLU, was a member of the Tuscaloosa Action Committee for Civil Rights and was vice chairman of the Tuscaloosa Civil Liberties Union Chapter. He also participated in on-campus civil rights activities and was part of a civil rights organization called the “Discussion and Action of Human Rights,” made up of 100 UA students and faculty (who were denied a charter by the UA Student Senate). The Ku Klux Klan thought Klitzke enough of a threat to burn crosses three different times in the front yard of his Pinehurst home.

In 1966, Dr. Klitzke participated in an SGA sponsored publication for their annual symposium “World in Revolution,” part of the SGA’s yearly student symposium (headed by then SGA president Ralph Knowles). Klitzke wrote an essay titled “Is this University Free?” for Emphasis 67 (available at W.S. Hoole Special Collections). The booklet included essays by several intellectuals including civil rights activist and Selma march participant Stokely Carmichael, as well as Chairman of the Joint Chiefs of Staff Earle G. Wheeler. Klitzke wrote a wide-ranging essay that discussed the problem of student apathy on campus as well as the Civil Rights Movement, along with other social issues. Toward the end of the essay, he wrote what seems today to be a prescient and courageous statement about the prospects for racial justice in America:

“Ultimately the economic foundations of this country must be shaken if black people are to control their lives…For a century, this nation has been like an octopus of exploitation, its tentacles stretching from Mississippi and Harlem to South America, the Middle East, southern Africa, and Vietnam…a powerful few have been maintained and enriched at the expense of the poor and voiceless colored masses. This pattern must be broken. As its grip loosens here and there around the world, the hopes of black Americans become more realistic. For racism to die, a totally different America must be born.” Ted Klitzke, “Is This University Free?,” March 1967

Image caption and credit (top right): Artist Lee Krasner with Ted Klitzke and UA alumni and benefactors John Burnum and Celeste Burnum at the opening reception for Krasner’s solo exhibition in Garland Hall in 1967. Collection of the UA Department of Art and Art History.

Before and after becoming chair of the art department at the University, Dr. Klitzke held a distinguished career as museum professional, art historian and administrator. He received the BA from the University of Chicago, served as assistant to the curator of prints and drawings at the Chicago Art Institute and taught art history as an instructor at the University of Chicago. He then studied at the Institute of Art and Archaeology of the Sorbonne and the Ecole du Louvre in the late 1940s. From 1948 to 1951, he was an educational adviser to the United States government in Nuremberg, Germany. In 1953, Klitzke earned a doctorate from the University of Chicago and then was assistant professor of art history at Alfred University in Alfred, N.Y., before coming to Alabama. In 1968, Klitzke left Alabama to become vice president of academic affairs and then dean of the faculty at the Maryland Institute College of Art (MICA) in Baltimore. He served twice as acting president of MICA from 1974 to 1976 and again from 1977 to 1978. He also taught a popular history of printmaking course at the college, according to his obituary in the Baltimore Sun.

For more information about the UA Department of Art and Art History and its programs, visit this link: https://art.ua.edu/academics/ or contact the department at (205) 348-5967.