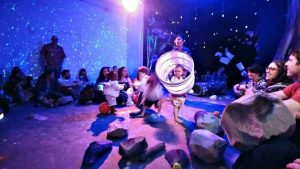 with Dashboard Projects’ sculptor Kelly O’Brien, and dance and performance collective Fly On A Wall to create a space-themed installation for newborns to 2-year-olds and their caregivers as part of Alliance’s “Theatre for the Very Young Series.” Cassidy and O’Brien created video installations and sculptural elements for “Babies in Space,” an interactive outer-space playscape and performance that was described as “a touchable, jumpable, mesmerizing space with a Brian Eno-like soundtrack” by Creative Loafing. More than 1,200 babies and caregivers took part in the interactive performance from May to September, 2016.