OCT 2014 UPDATE: We just got the final tally for the NUCOR-Children’s of Alabama Charity Classic!

“Pretty awesome,” commented Professor Craig Wedderspoon. “The four pieces together made $41,000 for the hospital!”

The break down: Meredith Randall Knight’s Tee Off brought $6,000. Kelly Shannon’s “golf ball” sculpture was auctioned for $9,000; Eric Nubbe’s steel model of Children’s Hospital claimed $11,000; and Craig Wedderspoon’s bronze Simon the Lion went for $15,000. Donations for the charity event this year totaled $300,000, according to Wedderspoon.

NUCOR Steel and Children’s of Alabama decided to do something different this year for their 8th annual Children’s Charity Classic golf tournament and live auction. The planning committee, made up of NUCOR executives and Children’s Hospital board members, asked Professor Craig Wedderspoon to find students to create and donate steel sculptures for the event. Three of our art students and Wedderspoon proposed art works for the auction that helps raise hundreds of thousands of dollars each year for the only pediatric hospital in the state. Thinking they were competing against each other, 2014 MFA graduate Meredith Randall Knight, current grad student Kelly Shannon, senior BFA major Eric Nubbe and Wedderspoon presented sculpture proposals to the charity event committee. In a surprise move, the committee chose all four projects to be in the spotlight for the auction October 5, 2014. 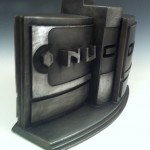 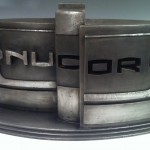 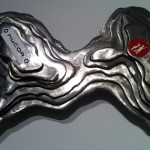 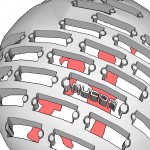 Meredith Randall Knight’s steel sculpture, Tee Off, references the charity golf tournament. Knight fashioned steel into a small topographical landform. She placed the NUCOR logo where golfers would tee off and added a hole in the “steel scape” at the opposite end of the piece, with the Children’s Hospital’s logo as the “goal,” emphasizing the charity’s purpose.

Kelly Shannon also combined the elements of the golf ball, NUCOR logo and Children’s Hospital logo. When she finishes the work, Shannon said that viewers will be able to see light filtering in from behind the steel layer of the golf ball’s outer “skin.” 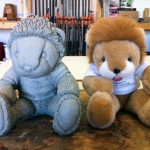 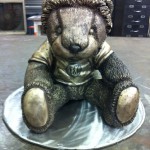 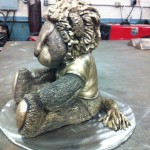 Every child who checks in to Children’s of Alabama gets a fuzzy friend to hold while she or he is in hospital. Simon the Lion is the mascot of Children’s and he now has been immortalized in lion-size bronze statues in Wedderspoon’s piece for the auction.