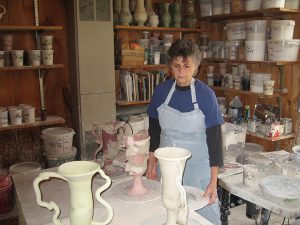 8,000 years ago Homo sapiens began to produce pottery around the world wherever clay deposits were to be found. Clay gave our species the ability to make vessels for the storage of grains and seeds, to make items of worship, and led eventually to the invention of writing and counting on wet clay tablets, which led the way for civilization. From the beginning, the potter was both a functional maker of useful objects and a maker of objects depicting myth creation. There was little separation between the functional and the spiritual object. They were often one and the same.

Between 6,000 and 4,000 BC in Mesopotamia the potter’s wheel was invented, which made working with pottery easier and enabled large-scale productions. The Etruscans used molds, as did the Romans. The early Greek “Aegean” pottery became highly sophisticated in its decorative overlays where figures of everyday life could be depicted in Attic Black and Red Figure vessels. The early Greeks, and later the Athenians, developed the first “slips” and brought their pottery to a very high art form, with shapes and sizes that outfit the lexicon of potters to this day.

Over the millennia pottery and sculpture became quite separate endeavors, yet here and there the two crafts became one. At its height, Greek pottery was an art form that went beyond the clay pot’s utilitarian purposes; it was regarded as a thing of rare beauty and symmetry and required a master painter’s skills to depict the scenes of heroic events that typically adorned the vessel. Those that have been excavated or found reside in museums displayed proudly alongside a Rembrandt or a da Vinci. 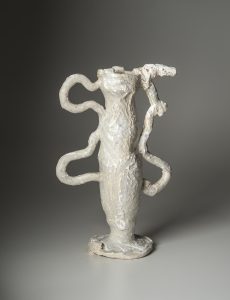 So at what point does a pot become “high art”? What are the indicators that govern that subtle transition and what are the thoughts of the artist who makes such work?

Alice Hohenberg Federico was born in Selma, Alabama, at a time when Southern society still retained much of its traditional roles for men and women. As a child in grammar school, Federico became interested in archeology. Walking the plowed fields along the Alabama River, she would find Indian arrowheads and shards of old pottery. A quiet passion for these artifacts marked her early years in Alabama. On the surface, Alice appeared destined to teach, marry, and become a homemaker. She graduated from Hollins College with a degree in American history. She pursued graduate studies in American history at the University of North Carolina at Chapel Hill for one semester and then volunteered to join VISTA to work with traumatized children. During this time, something happened that altered her life trajectory. Federico was not destined for the academic world or, perhaps, for anything “traditional.”

It is not for this writer to hypothesize on the details that catapulted a young woman away from a certain way of being in the world to discover, by working in clay, a means of self articulation and how to rebuild, as it were, from the ground up, her self confidence and delight in the world again. But we know it happened along those lines. Between 1969 and 1974, Alice Hohenberg Federico studied ceramics with Rita Marlier at the Chrysler Museum School in Norfolk, Virginia and, as the artist says, along with other students, “ immersed themselves in all things clay.”

The artist described for me those times as having an almost feverish need to work and to master the clay. To this day, it is this profound relationship to clay that drives her work ethic: “I love the feeling of my hands on the clay… the clay between my two hands as it starts to move and to grow… elemental creation. But it took a long while for me to master the medium…I mean working all day and all night…months on end… to repeat the process over and over again until it was totally ingrained and an unconscious effort…you can only get good at anything, I guess, that way. By doing it a lot, and I did. It took me many years to make a good pot and I begin each work I make by drawing upon those years of concentrated focus on the clay.” 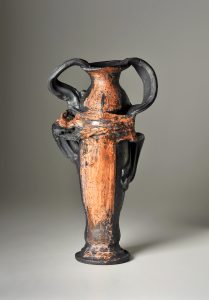 In 1975 Alice Hohenberg Federico received her MFA from East Carolina University and in 1984 she went to study with potter Ken Ferguson at the Kansas City Art Institute. Federico describes him as a “fantastic teacher” who introduced her to cultural ceramics. Through Ferguson she was introduced to Japanese pottery masters whose clean lines and matte finishes impressed her enough to go to Japan for a month of in-depth study. Ferguson was known for being a bit of a character; one who claimed there was no room for sentiment in pottery, yet utilized animal (hares) motifs. He approached his own work with a combination of reverence and humor, experimented widely with salt glazes, and has been described by one of his sons as a man for whom “throwing was his meditation.”

Federico mentions two high points in her early development: the total immersion in the techniques of working in clay and the establishment of her own ceramics studio. She built her first kiln in the back of a garage she rented with a friend. They had a clay mixer so she could experiment and make her own clay recipes. Federico told me that, “often it’s a combination of different clays that contribute to a finished product.” She mixed her own stoneware using clays such as old mine #4 Ball Clay, Georgia Kaolin, and Fireclay. She made (and still does) her own glazes using whiting and talc, Cornwall stone, feldspar, potassium spar, lithium, barium and manganese.

For those who have worked in ceramics, it is the only art form where the glazes do not look, upon application, at all as they will once they are fired up to extreme temperatures. High-charged reds, blues, or yellows go onto a pot as a gray or off-white nondescript liquid. As a result, there is a thrill when the work comes out of the kiln and cools. The artist says, “It’s like Christmas…there is still, for me, the element of surprise.” In this way, as in other stages of the development of a ceramic, it is about “process.” 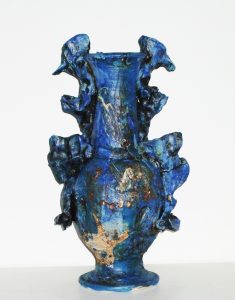 In America in the late 1960s and early ‘70s there was a movement initiated mostly by sculptors of what has since been called “Process Art.” Artists like Richard Serra, Alan Saret and Lynda Benglis made work that depended upon a process that included unpredictability. The idea in its purest sense was to have the artist get out of the way of the material and let it do its thing. The artist was there to nudge the medium, but that the medium would be the message. Therefore, it is fascinating to hear Federico say that, “One day… all of a sudden I made a pot and twisted it… and it became an abstracted figurative object…that was the day I started doing my own work.”

One of the themes of Alice Hohenberg Federico’s work is the development of forms that echo the past but move into the present as her own. There are several works in this show that exemplify the classical Greek shapes mentioned earlier, in particular the form of the amphora. Federico has made references to these structures throughout her career but, in the pieces on display in this exhibition, it’s clear she has become a master of them. She can reproduce these classical silhouettes with great dexterity and seriousness, but she can also tilt them and dress them up like a humorous Tower of Pisa decked out in calypso colors and ruffles. These forms are but a starting point for her journey to liberate the clay.

The artist similarly acknowledges influence from the work of Dame Lucie Rie, an Austrian-born British ceramicist, best known for her modernist bottles and bowls. But again, the shapes explored by Rie are not just reproduced here; they function as a starting point for Federico, in her exploration of how a pot is made and how it transforms in the process from start to finish. There are three bottle vases in this exhibition through which she shows us that she can throw the most symmetrical and beautiful (possibly functional) vase in the world. And that would be enough for most of us. Though for our artist, I am glad to say, it is not enough. And it is the moment that she decides to take the form to the next step, which may not be pretty or symmetrical, that she crosses the line from functionality and enters the world of sculpture, fine art, and the spiritual. 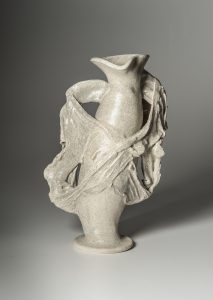 allowing them to relax into graceful chaos, with a slump or a twist, and finishing them off with a perfect rim. She spent a lot of years developing these ideas/forms/shapes and the methods of executing them. She says, “ I explored many forms over the years and I can draw on the time that I have spent with each shape…they are shapes thrown in parts, and I build the forms to make the whole. As a mature artist I have these forms that I have put time into learning and then making the shapes a part of me…I enjoy doing it. That’s the point!”

I recommend to the viewer a close examination of the handles on her pots. There is something traditional about a pot with handles, but then Federico changes the rules. Sometimes they crunch up and flatten, or they appear to be trying to detach themselves from the body of the pot like arms waving and undulating. The artist has said, “It’s very hard to get big handles on pots.” The form of the amphora demands handles, yet hers are a crumpled ruin or too fragile because, as she states, “They are a declaration that this piece is not primarily functional.”

Alice Hohenberg Federico has succeeded in her work to traverse the line that separates traditional ceramic craft and fine art. When the potter, Peter Voulkos, took his earthenware plates and, using his thumbs, pressed from behind and made holes in them, he was declaring that the work was not functional–but art. It takes great mastery of the medium, and clear focus, for any artist to make contributions to the history of his or her craft. In Federico’s oeuvre I find all my questions answered about the dialectic leap from clay to spirit, and from pottery to sculpture. In looking at any one of her pieces we are confronted with the entire history of pottery and, by her dynamic usage of the materials, we breathlessly enter the modern world on Federico’s strong yet genteel Southern shoulders.

Vered Lieb is an art historian and art critic
The essay is reprinted from the catalog for an exhibition of Federico’s work in the Sarah Moody Gallery of Art, November 29, 2018 – January 11, 2019 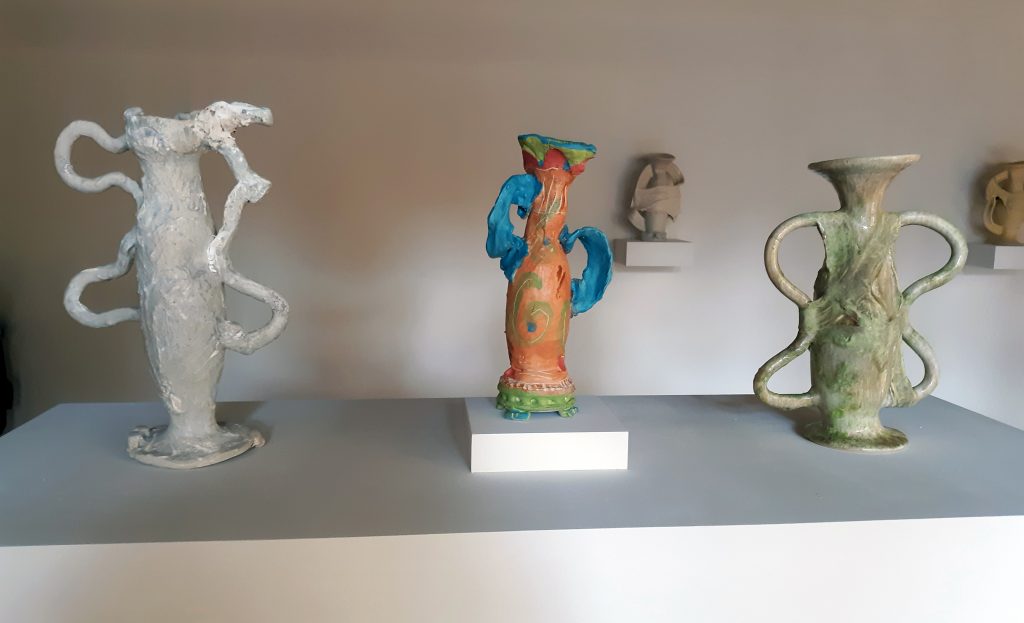