The Arts Council of Tuscaloosa will host an exhibit of paintings by artist and UA art alumna Janet Mego at the Dinah Washington Cultural Arts Center Aug. 4-25, 2017. Titled “Dancing ‘Round the Rabbit Hole,” the display will be featured in 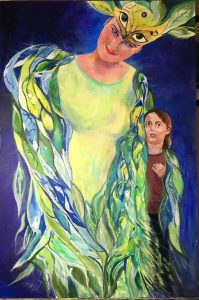 Mego has been creating art since the age of six. She received the BFA in painting from The University of Alabama. Much of what the artist creates has been influenced by the fine art of “learning to see,” implemented masterfully by those professors essential in taking her far beyond the face value of that degree. These influential mentors include Alvin Sella, Richard Zoellner and Arthur Oakes. She has served as Artist in Residence for the Sumter County Fine Arts Council in the 1980s, adjunct art instructor at Livingston University (now The University of West Alabama) and has received commissions due to her unique style and use of color.

“Dancing ‘Round the Rabbit Hole” is about the artist’s own series of rabbit holes: places and faces of magic and mystery, tweaked by her imagination and conveyed through acrylics and watercolors. “Lewis Carroll’s Alice encounters the things that dreams are made of on her trip, as do I. Some of her experiences evoke wonder, even delight. At times, though, these creatures evoke conflict and concern,” said Mego.

The title piece reflects the love for drama and Shakespeare that the artist’s mother instilled in her as a child; On the other hand, “Rabbit Holes” can represent places of danger, conflict and chaos with “Hiroshima Dream,’” a parallel of this dark element. The relationship between humans and animals, especially birds, fascinates Mego with animals often playing a role in her landscapes. “My grandfather owned a pet crow and he also possessed that magical ability to draw other animals into his space. Alvin Sella, the painting teacher who most inspired me, once wrote to me that “Fences were made for those who can’t fly,’” recalled the artist.

The Arts Council Gallery is open weekdays 9 a.m.-noon and 1-4 p.m. with free admission.