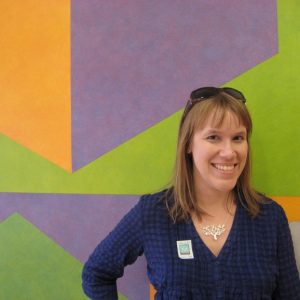 the 24th Annual Graduate Student Symposium in Art History at UA on March 1, 2019. Zuromskis’ talk at 4:15 p.m. is titled, “Feeling History: Evidence, Affect, and the Visual Culture of the Kennedy Assassination.” The symposium, a shared production of the departments of art and art history at The University of Alabama and the University of Alabama at Birmingham, will take place this year at the Bryant Conference Center on UA’s campus.

In her talk, Zuromskis will explore shifting perceptions of the camera’s evidentiary capabilities through an analysis of the notorious Zapruder film of the Kennedy assassination. The Zapruder film is an enigmatic piece of evidence, at once allowing us to witness the crime “first hand,” through the eyes of an everyday citizen, yet failing to prove anything we don’t already know or solve the crime we see committed. Examining the film in the various contexts in which it has been presented – Life magazine’s coverage of the assassination, popular films like Oliver Stone’s JFK and Peter Landesman’s Parkland, and the didactic exhibition of the Sixth Floor Museum at Dealy Plaza – Zuromskis argues that the Zapruder film constitutes not so much a failure of technological representation as a move away from ideological narrative photographic or filmic truth to one of affective, first-person experience. 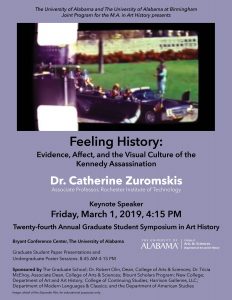 Zuromskis is the author of Snapshot Photography: The Lives of Images (MIT Press, 2013), a finalist for the College Art Association 2015 Charles Rufus Morey Book Prize; and the author and editor of The Factory (La Fabrica, 2012), the catalog for the exhibition From the Factory to the World: Photography and the Warhol Community, which she curated for PhotoEspaña 2012. Her writings on photography, film and visual culture have appeared Art Journal, American Quarterly, The Velvet Light Trap, Photography & Culture, Criticism and the edited volumes Photography: Theoretical Snapshots (Routledge: 2009) and Oil Culture (Minnesota: 2014). Her teaching interests center on histories and theories of photography, visual culture, contemporary art and critical theory. She also has taught courses such as Public Art in Twentieth-Century America, Photography and Celebrity Culture, The Snapshot Aesthetic, and Contemporary Art and New Media.

About the symposium: The Annual Graduate Student Symposium in Art History, sponsored and shared by the departments of art and art history at The University of Alabama and the University of Alabama at Birmingham, alternates campuses each year. In addition to presentations from graduate students from multiple institutions, the symposium also features poster presentations from undergraduate researchers. The symposium was begun in 1995 by faculty on both campuses to bring their students together to hear and be heard by eminent scholars working in the field of art history. Renowned scholars such as Paul Barolsky in the field of Italian Renaissance art, Allison Kettering in the field of Dutch Baroque art, and young, up-and-coming scholars like Michael Yonan, Krista Thompson, and Graham Boettcher, now director of the Birmingham Museum of Art, have been keynote speakers.