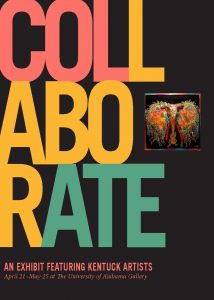 The works of eight Kentuck studio artists will be displayed through Thursday, May 25, at The University of Alabama Gallery in the Dinah Washington Cultural Arts Center in downtown Tuscaloosa.

The gallery will hold a reception for the exhibit, “Collaborate, an Exhibit Featuring Kentuck Artists,” Friday, May 5 from 5:30 to 7:30 p.m. The exhibit and reception are free and open to the public.

There will be approximately 60 works featured in a variety of mediums, from painting and sculpture to weavings and home furnishings.

The eight artists include:

Steve Davis
Davis of Sunheart Metalworks is a self-taught metalsmith, who brings to life ferrous and non-ferrous metals using a variety of contemporary and traditional techniques. Sunheart commissions include Westervelt Gardens, Children’s Hands On Museum, the UA Arboretum and downtown Northport streetscape projects.

Sydney Gruber
Gruber was born and raised in Memphis, Tennessee. She began as an alchemy artist who restored gently used furnishings to give them new life. Her specialty is in revitalizing and rejuvenating the mundane with vibrant swirls and patterns of paint.

Kerry Kennedy
Kennedy’s first love is pottery and sculptural ceramics. She received the MFA from UA in ceramics and has thrown pottery for over 10 years and makes primarily functional pieces. She is deeply interested in works that fuse thrown forms with organic aesthetics.

Lorrie Lane
Lane is an improvisational realist painter whose subjects include flowers, birds’ nests, garden landscapes and portraits. She has participated in shows such as Artsclamation!, The Brentwood Show, and the Huntsville Art Museum Galas, and she also has had solo exhibits in Nashville, Tennessee, and upstate New York. Lane was born in upstate New York and graduated from Smith College.

Daniel Livingston
Livingston specializes in raku and has won multiple awards at festivals across the country. His work is represented in private and corporate collections throughout the United States, England, France, Japan and New Zealand. He received the BFA and MFA from UA and is a former instructor of ceramics there.

Terrell Taylor
Taylor was born in Union, Mississippi, and grew up in various states throughout the South. Terrell has a background in art and anthropology, and her works, which vary from prints, paintings, sculptures and more, are often inspired by Southern life. She received the MA in art from UA.

Jessica Tuggle and Andrea Moen
Tuggle and Moen are weavers with Weaving Alabama. Together they use three floor-looms at the shop to create hundreds of yards of handwoven fabric.

The UA Gallery offers a year-round schedule of exhibitions of artistic works, artifacts and textiles and other media from permanent collections held by UA as well as works by faculty, students and guest artists and designers.

The gallery is part of UA’s College of Arts and Sciences, the University’s largest division and the largest liberal arts college in the state. Students from the College have won numerous national awards including Truman, Rhodes and Goldwater scholarships.