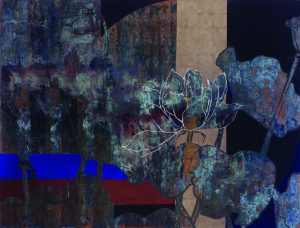 The 2018 Farley Moody Galbraith Endowed Exhibition features the work of internationally recognized artist Robert Kushner. Kushner will give a gallery talk about his work on Wednesday, February 7 at 6 pm in the Sarah Moody Gallery of Art, 103 Garland Hall on UA campus. A reception will be held Thursday, February 8, from 5 to 7 p.m. in the gallery.

Kushner (b. 1949) is an American painter known as a founder of the Pattern and Decoration art movement of the 1970s and 1980s. Kushner’s work combines organic representational elements with abstracted geometric forms in a way that is both decorative and modernist. Since the 1980s, he has used a full spectrum of color with gold, silver and patinated copper leaf to render the flowers and leaves, which have become his signature motif. “I never get tired of pursuing new ideas in the realm of ornamentation. Decoration, an abjectly pejorative dismissal for many, is a very big, somewhat defiant declaration for me,” he says.  Kushner draws from multiple influences, including Islamic and European textiles, Henri Matisse, Georgia O’Keeffe, Charles Demuth, Ito Jakuchu, Qi Baishi and Wu Changshuo.

The Sarah Moody Gallery of Art is supported by the College of Arts and Sciences and the Department of Art and Art History.

Garland Hall is a five-minute walk from the Campus Drive Parking Deck and Bus Hub on Hackberry Lane. Information about visitor parking is available here: http://bamaparking.ua.edu/visitor-information/. For further information, contact the gallery at 348-1891.