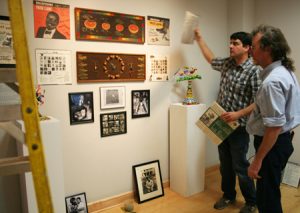 “Raudelunas was the single largest influence on my early career. My long-term participation with the international surrealist movement stems from my work with the group.” –Janice Hathaway, BFA 1973, MFA 1975

Tuscaloosa, AL. — [SPECIAL TO THE LOUPE] — The 1970s were revolutionarily creative years all over the world and The University of Alabama campus was no exception. UA students demonstrated against the war and for women’s rights, civil liberties generally, and the environment. They also expressed themselves artistically with outdoor music concerts, improvisational events and other often spontaneous happenings.  In the mid ‘70s, some UA students got together to make improvisational and avant-garde music, art and performance, and called themselves the Raudelunas, (pronounced ra-DELL-uh-nus), an Armenian word referring to the moon and its mythical powers.

In 1974, the Raudelunas art collective put on the ‘Pataphysical Revue exhibition-performance in the Ferguson Center’s original art gallery (located where the Alabama Credit Union is now).

Now, that revolutionary moment in time will be recreated for a few weeks where it originally took place: the Ferguson Student Center. The Raudelunas Exposition 2013, organized and curated by Lee Shook, Jr., will feature a retrospective of visual art and archival materials from the Raudelunas group’s activities in the 1970s including group drawings, paintings, assemblages, sculptures, manifestos, posters, records and photographs. 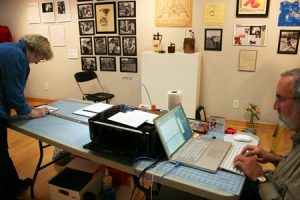 Shook writes that the performers-exhibitors will include “the humorously dark satire of Dada-inspired big band leader Reverend Fred Lane [a.k.a. Tim Reed], the wild and free improv excursions of the Blue Denim Deals Without The Arms and TransMuseq and the Surrealist-inspired artwork of Craig Nutt, Janice Hathaway, and Fletcher Hayes – among many, many others.”

The Raudelunas Exposition will culminate in a one-night-only reunion concert on Saturday, February 2, at the Ferguson Center Theatre, part of the Sonic Frontiers concert series at The University of Alabama. The concert will feature internationally-acclaimed violist LaDonna Smith, guitarist Davey Williams and harpist/composer Anne LeBaron, and sculptor Craig Nutt on the “Folgerphone,” along with several surprise guests. Documentary filmmaker Skizz Cyzyk will video the closing reception and concert.

The concert will also feature two short films. Rare footage of the Raudelunas members performing in a mid-1970s UA homecoming parade will follow the Alabama debut of the trailer for Icepick To The Moon, a feature-length documentary about the Reverend Fred Lane and Raudelunas by Skizz Cyzyk.

Several of these students were art majors/grad students or were closely tied to the art department: LaDonna Smith – now an internationally acclaimed improv violist – and sculptor Craig Nutt – who has worked for several years with Craft Emergency Relief Fund (CERF) — took many courses in the department. Janice Hathaway and Fletcher Paul Hayes earned BFAs and master’s degrees in studio art. The participants mentioned here, and most of the rest of the group continue to be working artists, musicians, and creative people today.

Raudelunas member and department of art and art history alumnus Fletcher Paul Hayes (BFA 1973, MA 1974) created an illuminated red and white Plexiglas Raudelunas sign that towered over the original exhibition. For the retrospective exhibition, Hayes writes that he contributed two art works: a mixed-media sculpture titled “Souvenir of Florida,” which was in the original exhibition at Ferguson Center, and a print of his painting titled “Lake Spirit,” in which fellow Raudelunasmember and high school friend Anne LeBaron “sits atop the dam at Lake Lurleen, casting a web across the entire landscape.”

Hayes remembers how he first got involved in the group, with LeBaron, who was a music student. He met Craig Nutt (UA religious studies major), the late Lanny Hatcher and Roger Hagerty: “they were hilarious and friendly and we all seemed to be on a similar wavelength. I was intrigued with their crazy inventions, such as the ‘Folgerphone,’ which was a saxophone fashioned out of copper tubing and a Folger’s coffee can. They were multi-talented musicians and artists, and even though at the time I wasn’t familiar with the improvisational jazz music that they liked, they invited me to sit in on their jam sessions a couple of times, where I would toot on a harmonica or bang on a tambourine.”

Hayes recalls: “My role in Raudelunas included participation in the 1974 art exhibition at Ferguson Center. I [also] marched with the Raudelunas Marching Vegetable Band in the Homecoming parade: I wore a banana costume which I created out of corrugated cardboard, and filmed the event in Super-8 (silent) movie film.”

The Sonic Frontiers concert series is made possible by support from The University of Alabama’s New College, the UA College of Arts and Sciences, The UA School of Music, and Creative Campus. For more information about the exhibition and performance, contact Lee Shook, theaudiovore77@gmail.com.

If you are a University of Alabama art or art history alumnus/a and would like to be on our mailing list for alumni news and department history, email Rachel Dobson: rachel dot dobson at ua.edu.