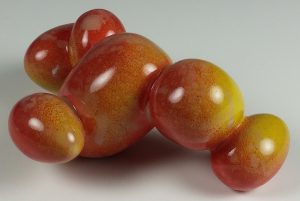 In his artist statement, Reed writes, “I feel that our world is characterized by opposition and anxiety.” His current work “focuses on repetition and multiplicity, attempting to find a unity or holism within those separate but same parts.” By bringing together separate sculptural forms he creates through molds and from templates, he hopes “to draw attention to the underlying cohesion that I find to be the actuality of our existence.”

Recently, we sat down with Reed to talk about his experiences since he has been in school. Before he decided to work towards the BFA, which is the professional artist’s degree, Reed was a double major in history and studio art. But, after a hectic year working full-time in a restaurant while taking three studio courses and an art history course, he changed his mind. He decided he wanted to focus on making art. Reed said, “I’ve always liked the tactile, kinetic aspect [of art].” His preference for being actively engaged with the physical world is part of what led him to 3-dimensional media, and to a concentration in sculpture and ceramics. 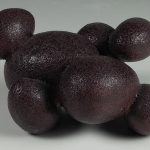 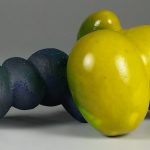 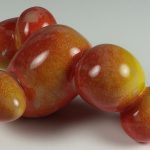 Reed explained his work process for the pieces in this exhibition. To create the forms for his sculptures, he poured liquid clay into an egg-shaped plaster mold in a process called ceramic slip casting. Reed smiles and adds, “Last year after Easter, I found a bunch of plastic eggs on sale.” After the clay dried, he refined the surface by sanding it. Then he bisque-fired the pieces to completely dry them out and took them through another round of smoothing. Recently, his process has changed. In earlier works, he joined the spherical pieces that he described as “at odds with each other” with epoxy, “forcing them together,” in their bisque state and then glazed, hiding the joint and thus smoothing over any signs of struggle. Now, he’s decided to reveal more of his work process by allowing the joined areas to show the epoxy. After firing and glazing, the final stages of construction involve gluing the ceramic pieces and mounting them on found objects such as pieces of brick and metal rods. The final product, Reed hopes, will convey that “underlying cohesion” of life.

What helped Reed decide to focus on studio art was the physical, hands-on aspect in his studio practice, which counterbalances the intellectual part of the process. Reed excels at both. Except for the semesters he worked full-time and slipped down to a 3.5 GPA, Reed has maintained a 4.0 throughout his college years. He also has been awarded a number of scholarships, which have allowed him to work fewer hours at his restaurant job. Among those are the Farley Moody Galbraith Endowed Scholarship, the Julie Peak Holaday Memorial Endowed Scholarship, the Elizabeth Bashinsky Endowed Art Scholarship and the Angelo Granata Endowed Scholarship. In the spring of 2017, he was awarded Outstanding Academic Achievement in Studio Art. In addition, Reed served in the Peer Mentor Program for the department of history from 2015 through 2017 and as an Art Ambassador for art and art history since 2017.

One of Reed’s ceramic works has just been accepted into a group exhibition in Philadelphia at the Clay Studio, Small Favors, his first juried show. “I applied on a whim and got in!” he said, obviously excited. His work will be shown with professional artists who have many more years’ experience than he does. “That made me feel great,” Reed said. We expect to see and hear more about Richard Oliver Reed’s successes after his graduation in May.

This exhibition is part of the bachelor of fine arts degree program in the Department of Art and Art History at The University of Alabama. For more information about all our programs, visit this link: https://art.ua.edu/academics/.  Harrison Galleries, LLC, is located at 2315 University Boulevard in downtown Tuscaloosa. It is open Monday through Friday, 12 noon to 5:00 pm, and by appointment. Call (205) 464-0054 for more information.