The Sarah Moody Gallery of Art invites you to Juvenile-in-Justice: Photographs by Richard Ross, January 8 through February 8, 2015 in 103 Garland Hall on UA campus. The artist will give a public lecture on his work Wednesday, January 14 at 7:00 p.m. in 205 Smith Hall. Everyone is invited to a reception on Thursday, January 15 from 6:00-8:00 p.m. in the gallery. 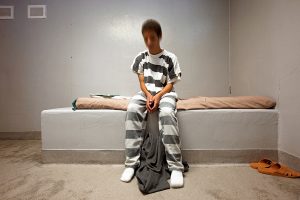 California photographer Richard Ross turns his lens on the socially relevant topic of youth incarceration. Culled from nearly 1,000 images of juveniles at more than 200 detention facilities in 31 states taken over a six-year period, this exhibition is a sobering look at America’s prison system. Richard Ross has documented the placement and treatment of American juveniles housed by law in facilities where officials treat, confine, punish, assist and, occasionally, harm them. About his art, Ross says, “the work exists at the juncture of art, social practice, and politics with the goal of creating interest and action that goes beyond ‘liking’ or ‘sharing.’”

Richard Ross has been the recipient of grants from the National Endowment for the Arts, the National Education Association, the Center for Cultural Innovation, and the Annie E. Casey Foundation, as well as Fulbright and Guggenheim Fellowships. Ross was the principal photographer for the Getty Conservation Institute and the Getty Museum on many of their architectural projects. He has photographed extensively for the Canadian Center for Architecture, Nike, New York Times, Los Angeles Times, San Francisco Examiner, Vogue, COLORS, Courrier and many more. He has published twelve books of his work including Architecture of Authority, Waiting for the End of the World, Gathering Light and Museology. Ross has been a professor of art at the University of California, Santa Barbara since 1977. His photographs have been exhibited in museums worldwide and he is represented by Ronald Feldman Gallery, New York. See the entire project at www.juvenile-in-justice.com.

The Sarah Moody Gallery of Art is supported by the College of Art and Sciences and the Department of Art and Art History. Additional program support comes from the Farley Moody Galbraith Support Fund. Gallery hours are Monday through Friday: 9:00 – 4:30 p.m. and Thursday evenings: 5:00 – 8:00 p.m. The gallery is located at 103 Garland Hall in the heart of the UA campus on Woods Quad. There is no admission charge. For further information, contact the gallery at (205) 348-1891 or on the web: https://art.ua.edu/gallery/smga/.

Information about visitor parking is here. Parking is free on campus in a legal space after business hours and on weekends.