A painter in the Neo-Expressionist style, Russ Warren draws inspiration from Spanish masters such as Velázquez, Goya and Picasso, as well as from Mexican folk art and the American Southwest. His 45-year career is examined in the exhibition Russ Warren: Works 1971-2015, on view at the Sarah Moody Gallery of Art at The University of Alabama from October 29-December 4, 2015.

Russ Warren is openly fascinated with historically monumental painters. His storied approach to painting engages the viewer as witness to the moment depicted. He embraces the ambivalence and uncertainty of all creatures, each facing life and death. Carter Ratcliff of Art in America has said of Warren’s work: “People and dogs and horses are equals…so intimately connected that everyone seems to be everyone else’s alter ego.” 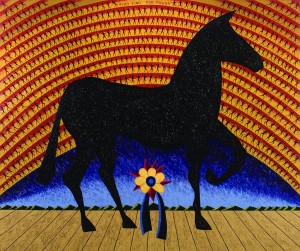 This exhibition was organized with Les Yeux du Monde, Charlottesville, Virginia. An illustrated catalogue features an introduction by Davidson College professor of art history Shaw Smith, an interview by UA associate professor of art and gallery director William Dooley and an essay by Art in America contributing editor Carter Ratcliff.

Russ Warren has works placed in numerous public and private collections. His paintings were included in the 1981 Whitney Biennial and he exhibited at Phyllis Kind Gallery (Chicago and New York). This exhibition will also travel to Davidson College in North Carolina.

Funding support for the 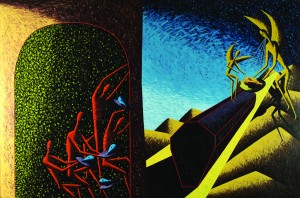 d Hall in the heart of the UA campus on Woods Quad. Information about visitor parking is available here: http://bamaparking.ua.edu/visitor-information/. Parking is free on campus in a legal space after business hours. For more information, contact the gallery at (205) 348-1891 or go to https://art.ua.edu/gallery/smga/