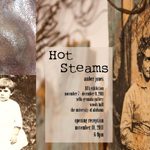 Through the art of ceramics and sculpture, Northport native and University of Alabama senior BFA major Amber Jones has been discovering what it means to her to be “Southern.” For Jones, being Southern has to do with hard work and a culture of storytelling in her family and from Southern literature, glazed and fired with the colors and textures of the natural world where she grew up in Tuscaloosa County.

Jones has translated her Southern perspective into a body of art work that she will exhibit from November 7 through December 9 in the Sella-Granata Art Gallery on The University of Alabama campus. “Hot Steams” will feature the ceramics and sculpture she has produced as part of her work for the Bachelor of Fine Arts, a professional art degree, from the UA Department of Art and Art History. Jones will graduate in December.

The exhibition title alludes to “Hot Steams” — people who, in Harper Lee’s To Kill a Mockingbird, have died, but continue to hang around on earth. In her art work, Jones uses “Hot Steams” as a metaphor for her ancestors who have passed on and yet still influence her every day.

“For example,” Jones explained recently, “the mixed media installation Moon Shrine was created to pay homage to the people who kept food on their families’ tables by making illegal moonshine deep in the woods and [then] coming up with creative ways to evade the law. While some may look upon these individuals as criminals, I see them as some of the true heroes of the South.”

Moon Shrine is an installation piece, as are most of her sculptures for this show. “[The installation] has several mason and larger jars filled with clear liquid, candles, a gas can, a hubcap, etc, that reference what goes into making moonshine.” Jones adds for clarification: “Cars for hauling.”

“I have always been close with my extended family, and have heard countless stories about the members who came before me. My family’s history is passed down through an oral tradition of narratives and biographies that are often humorous and usually embellished. In my work, I hope to create a new vein of visual family history that can serve the same purpose of preserving the narrative of my family and explaining why we are who we are.”

Amber Jones is who she is in part because of hard work, volunteering, and the “kindness of strangers.” In 2007, Jones was one of 15 Alabama students who received the J. Craig and Paige T. Smith Foundation Scholarship, awarded to first-generation college students who show strong leadership qualities and meet other requirements. Her scholarship totaled $60,000. Jones also received the Capstone Scholarship in 2007. And in 2011, Jones was awarded the Farley Moody Galbraith Endowed Scholarship in Art.

Jones has a long history of volunteering in her community, and in at least one case, has given back to an organization that helped her early in life. Born with osteogenesis imperfecta, the disease sometimes known as “brittle bones,” Jones attended UA’s RISE program as a child. As a Tuscaloosa County High School student she volunteered there, as well as with the Children’s Hands-on Museum and United Cerebral Palsy. In college she volunteered with UA’s Circle K Club, where she held leadership positions for three years. Jones’s service work extends to the UA Department of Art and Art History where she is a member of Crimson Ceramics, a student-run organization that raises money for scholarships, and has served as its president for two years.

Along with these volunteer positions, Jones has worked part-time jobs through two years of high school and throughout her college career, in positions at UA Housing, the Crimson Calling Center, at Fifth and Main, and most recently in the Sella-Granata Art Gallery.

Jones puts a huge amount of energy not only into volunteering and her “regular” jobs, but also into her school and art work. “Because of my bone disease, I’ve faced limitations my entire life. While these limitations were minor compared with the limitations of others with this disease, I still felt their weight. Walking into the woodshop and metalshop [in the UA Department of Art and Art History] and learning to use the tools my father and uncles have used their entire lives made me feel capable and powerful, while strengthening the connections I have to my family. I shocked my Uncle L.V. when I walked in his cabinet shop and told him I had experience with every tool in there.”

“It feels good to know I can do things that other people think I can not. Sometimes I push a little too far and I fail, but I’ve been lucky that my teachers — like [sculpture professor] Craig Wedderspoon, [ceramics instructor] Daniel Livingston and [Arts Technician Senior] Mark Stevenson — pick me back up. They never make my goals seem out of reach, but they do help me focus my ideas. Without them, I would not have made it this far. Nothing I ever dreamed up was too crazy for them, and they always supported me. I owe them everything.”

A reception for the show will be catered by Fifth and Main of Northport, as well as members of Jones’s family, and will include Southern fare such as fried okra, fried green tomatoes, cornbread, chicken and dumplings, pimento cheese, deviled eggs, sweet potato pie, and banana pudding.