TUSCALOOSA, AL – Ferguson Center Art Gallery presents Tension and Release: Paintings and Drawings by Micah Craft, September 4 – 30, 2012.  The public is invited to a reception for the artist on Friday, September 7, from 6:00 – 8:00 p.m. in the student center gallery. Flickr set here.

Micah Craft, a native of McCalla, Alabama, created the art works in this exhibit in partial requirement for the Bachelor of Fine Arts, a professional art degree. He graduated from The University of Alabama in May of 2012. Craft’s concentration was in painting and digital media. He is an artist and musician and holds an internship as a junior graphic designer in Atlanta where he lives now.

Craft discovered his interest in design in high school. “I knew I wanted to do something creative as a career and graphic design seemed like it would fulfill that creative drive. I felt the same way when I started UA. I never wanted to study anything else in school except for art and music…When I took some painting classes I really enjoyed painting from my imagination, in an abstract style.”

“My artistic and musical ideas have developed simultaneously, for better or worse. [Since beginning the BFA program] the relationships I made between the practice of art and music have freed me to continue working the way I feel. I wanted to work in a two dimensional space and I wanted to work from my imagination. Improvisation and risk are part of my process. My work is created without direct observation. I instead draw upon a vocabulary I have developed, like a jazz improviser does.”

“I always ask myself, “Does a piece of music have to sound similar to something in the real world to have emotional value and impact?” No. Neither does art. The line, color, form has real value in itself. I take a lot from [Wassily] Kandinsky’s writings. Kandinsky related certain visual elements to music elements. Tension and Release is one of those elements/concepts. Every piece must have it. I try to create a tension and a resolution in my work.” 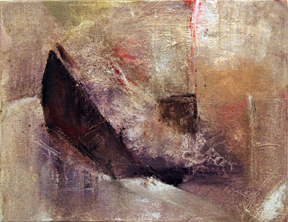 Craft says his years at Alabama were challenging. “At UA I was exposed to many good artists of different influences and backgrounds.  I learned that being an artist is hard work, and talent can’t take you all the way.” The professors here have been a great resource. Seven years ago I would have never guessed that art making would turn into a necessity as well as a joy.”

Craft recently was awarded third place at the 2012 Fourth Annual Emerging Artists Exhibit at the Orange Beach (AL) Arts Center, an invitational exhibition for new and emerging artists.  He sold all three of the works he entered.  Craft noted, “I have never sold any of my abstract paintings in a gallery setting.  It was a new experience for me, intimidating and exhilarating.  It showed me that I can connect with people through the things I make.”

About his future as an artist, Craft says, “The pursuit is going to be difficult but [it will be] the most rewarding way I can spend my life.  This realization might not have happened had I not attended UA and spent the time I did with the people I did.” 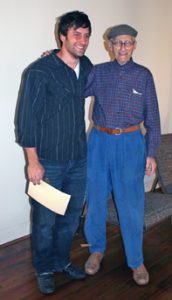 UA PARKING: A parking permit is not required to park on UA campus in a legal parking space after business hours. For information on parking, click here.