After 40 years of teaching, research, and service, our colleague, professor, friend and go-to guy for historical information, Dr. Robert Oliver Mellown, is retiring from The University of Alabama. Many of us have known Dr. Mellown in at least one of these capacities: professor of art and architectural history, researcher and writer, local heritage supporter, committee member, and thesis advisor. But there are a few things that we might not know about him. For starters, he is a UA alumnus with a legacy of living just off the beaten path.

Dr. Mellown first came to UA from Livingston, Alabama, as an undergraduate studio 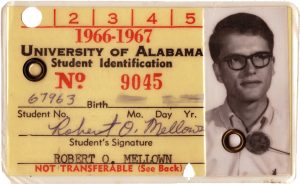 art major in the summer of 1963, in the midst of huge societal changes. He arrived soon after June 11, the day Governor Wallace tried to block two other new students, Vivian Malone and James Hood, who happened to be African American, from registering for classes. Mellown remembers attending church services that summer with Ms. Malone at the Wesleyan Center, the Methodist student center.

We also might not know that as a young student in the 1960s, Dr. Mellown protested against the establishment. When a friend and fellow art student was cited by a Tuscaloosa policeman for walking downtown wearing a t-shirt and jeans, the student’s friends, including Mellown, showed up at his court appearance wearing suits and ties in protest of the dress code.

As a studio art major, he immersed himself in his art courses. “As an undergraduate I was officially a painting major and took classes under Mel Price, Howard Goodson, and Al Sella,” says Mellown. He took graphic design and watercolor from Richard Brough and lithography under Richard Zoellner. (For more about some of these professors, go to our In Memoriam page.)

If we know Dr. Mellown as an art history professor, we might not realize that he has 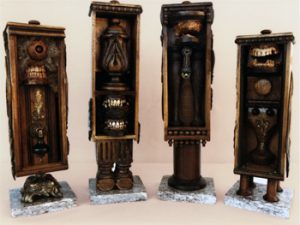 never stopped making art work. One of the few clues to the “bohemian” side of his personality is the collection of mysterious shadow-box sculptures he created that until recently lined the top of his Garland-third-floor-office bookshelf. Titled Gorgon, Harpy, Basilisk, and Sphinx, the mythic constructions reveal an enigmatic inner world with influences from Nevelson to Rauschenberg and Joseph Cornell.

Dr. Mellown intended to continue painting in graduate school and applied to several graduate programs in studio art, but, urged by his art history professors, he also applied to art history programs. “Because I took all of Ted Klitzke’s and Joe Bolt’s art history courses, I ended up with an undeclared major in art history. I had hoped to go to graduate school in painting.” Instead, the University of North Carolina – Chapel Hill made him an offer he couldn’t refuse: a three-year full fellowship. In his fourth year, he was awarded a Kress Fellowship, but took a special qualifying exam for art history that allowed him to skip the Master’s program and go immediately into UNC’s Ph.D. program to study Renaissance and Baroque art. In his final semesters, his focus turned to the less-plowed academic fields of American painting and sculpture. “Academics were just beginning to write about American art,” he remembers. So, he decided to write his dissertation on 19th-century American attitudes toward the nude in art. 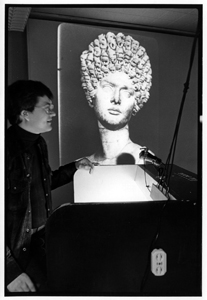 In 1971, Mellown was hired back to his alma mater.  Now he was a colleague of his former professors and mentors. In the first years, he taught Renaissance, northern and southern Baroque, 19th century, and American art history (which was painting and architecture combined). When asked how he ended up in architecture, he replied, “After I started teaching I got really interested in southern 19th-century architecture. I realized that very little had been published about it, and what had been was often badly researched.”  A step off the path, and the rest is (architectural) history. 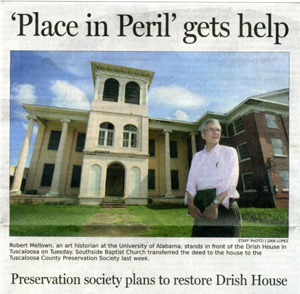 “My career path meandered somewhat. My curiosity about art and architecture has always led me off the beaten path, but I enjoyed the experience and I hope it made me a more interesting teacher.” — Rachel Dobson, reprinted with new links from The Loupe, Spring/Summer 2012

A Select Bibliography of Works by Robert O. Mellown – click here for more

“Tuscaloosa During the Civil War:”
http://www.historictuscaloosa.org/index.php?page=tuscaloosa-during-the-civil-war