GAY BURKE, the first female full professor in the Department of Art and Art History, retired this summer 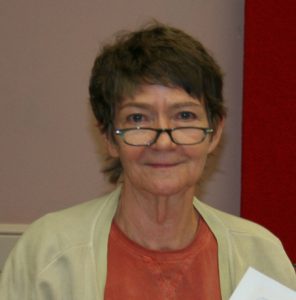 after forty-two years of service to The University of Alabama. In 1973, Burke was hired to teach photography when it was still not quite accepted as a fine art medium. She had earned her MFA from the University of Florida in 1972 where she studied under renowned photographer and photomontage innovator Jerry Uelsmann. After she came to Alabama, she worked with Walker Evans at the end of his career and brought Evans, along with alumnus and former UA instructor WILLIAM CHRISTENBERRY (BFA 1958, MA 1959), to visit her classes. WAYNE SIDES was a student in that class and photographed this unique intergenerational meeting of art photographers (right) who have influenced countless artists since. Sides, a renowned photographer in his own right, credits Burke with raising the profile of photography as an art form in the South. Considered one of our notable faculty, she has exhibited her celebrated and acclaimed work in over 80 national exhibitions including numerous solo shows at venues such as University of Nevada at Las Vegas, University of California at Berkeley and the School of the Museum of Fine Arts in Boston. A collection of photographs by Burke is in the Walker Evans Archive of the Metropolitan Museum of Art in New York. Wayne Sides’ essay, “Gay Burke and Alabama Art Photography,” is here. The spring 2013 issue of The Loupe featured many of Burke’s former students’ memories of her teaching. [loupe fall 2015]