Greek Goddess Gets a Makeover

For more than a century, a classically-robed goddess greeted newcomers to the place most recently named Bryce Hospital, promising all who entered youth and health as she poured real water from a ewer she held overhead. Now, Bryce Hospital has moved to its new location at the old Partlow State School, and the goddess and her fellow sculptures are moving as well. This summer, Craig Wedderspoon and Arts Technicians Patrick O’Sullivan and Mike Eddins repaired and repainted the antique zinc statue of Hebe, the Greek Goddess of Youth; a six-sided cast iron aquarium and fountain; a horse’s head hitching post; and a cast iron stable boy statue; as well as a few other items. When the renovation process is completed, the refurbished statues will be re-erected in a garden on the new Bryce Hospital’s grounds (old Partlow).

The History of Hebe

According to Associate Professor emeritus Robert Mellown, the mass-produced statues were brought in by Dr. Peter Bryce to decorate Bryce grounds around the late 1880s or early 1890s. Made by J. W. Fiske, one of the top American large cast-iron producers, the 5-foot-tall statue of Hebe was made from about 72 zinc pieces, molded separately and then stapled together. After more than 130 years, the staples have worn a little thin and her multiple layers of century-old paint weren’t enough to hold her together. To fix her, the renovation crew carefully sandblasted and scraped off layers of paint. They made extensive repairs and will give her several coats of paint before she joins the other pieces in the new Bryce garden.

Another large piece that has been transferred to the new Bryce garden is the cast iron and glass aquarium or fountain. It has a large 4-foot wide hexagonal basin decorated with finely detailed flora and fauna around its brim. Several of those leaves, swans and flowers had been damaged over the decades, but the renovation crew came to the rescue. They made molds from existing pieces to create new ones and gave it all a new coat of paint.

Another popular 19th-century cast iron work made by Fiske (and other companies as well) is a statue of an African American stable boy that stood near the main building of Bryce Hospital. Known as “Sambo” then, the work is now viewed as a racist symbol of slavery. Scholars look at it as a valuable cultural artifact to be studied for a deeper understanding of American history. Harvard professor Henry Louis Gates Jr. recently wrote about the issue of preserving and collecting what he calls “Sambo Art,” so that the art and the attitudes that developed it and made it popular can be studied as a part of our history. To read more, click here. 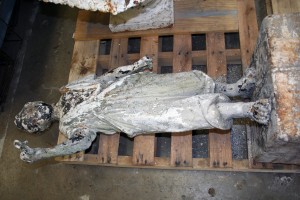