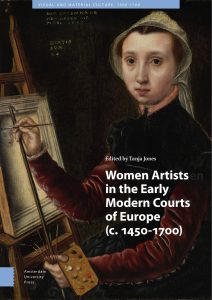 The book is the first dedicated to women as producers of visual and material culture in the European courts of the Early Modern period. Chapters offer new insights into the careers of artists such as Caterina van Hemessen, Sofonisba Anguissola, Luisa Roldán and Diana Mantuana. Also considered are groups of female makers, such as ladies-in-waiting at the seventeenth-century Medici court. Notably, the essays address production across media – including paintings, sculpture, prints and textiles – by women who occupied a range of social and economic positions within and around the courts. Both individually and collectively, the texts included deepen our understanding of the specific artists and courts highlighted and, more broadly, consider the variety of experiences of female makers across traditional geographic and chronological distinctions.

Dr. Jones teaches undergraduate and graduate courses on Renaissance and Baroque topics in the UA Department of Art and Art History. Her research focuses primarily upon the fifteenth-century courts of Italy, engaging issues of gender, identity, and transculturalism, with a specific interest in objects demonstrating intersections between Italy, France, and Byzantium. She has published extensively on the cast bronze portrait medals as objects manifesting this triangulation. Another book-length project, “Pisanello’s Medals: Dynasty, Destiny, and Crusade” (in progress), addresses the emergence of the cast bronze portrait medal in the 1430s and the political, religious and ideological value the small-scale sculpted form conveyed.

The new book, Women Artists in the Early Modern courts of Europe, c. 1450-1700, is a companion to “Global Makers: Women Artists in the Early Modern Courts” (www.globalmakers.ua.edu) digital humanities project, co-directed by Dr. Jones and Dr. Doris Sung. The Global Makers project, intended to support sustained, interdisciplinary consideration of the role Early Modern women played in the hands-on production of visual and material culture of the courts of Europe and Asia (c. 1400-1750), expands upon and extends the topics of study initiated in the text. The Global Makers project, featuring a crowd-sourced database of Early Modern women makers in the courts, is generously supported by the Samuel H. Kress Foundation, the Alabama Digital Humanities Center, the College of Arts and Sciences and the UA Department of Art and Art History.