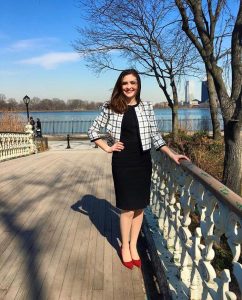 with a minor in French, has been setting goals and making plans for an exciting and challenging summer. “One large goal of mine has been to receive an internship position in a museum to gain more practical experience in the field,” Hallquist explained. She recently checked that goal off her list when she was offered one of eight highly competitive summer internships at the Metropolitan Museum of Art Cloisters Museum in New York. Dr. Jennifer M. Feltman, Assistant Professor of Medieval Art and Architecture said, “This is such great news for her professional development and future in museum studies and art history. She will be also a wonderful ambassador for our department, college and UA.” 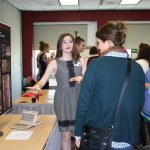 Hallquist has netted several awards and honors lately. She received an Honorable Mention for her poster research project at UA’s Undergraduate Research and Creative Activity (URCA) Conference in April. Titled “Images of Antichrist within Bible moralisée Codex Vindo bonensis 2554, Vienna, Österreichischen Nationalbibliothek,” the poster outlining her research on apocalyptic imagery in a 13th-century illuminated Bible was also recognized in March at the new Undergraduate Poster Session at the 22nd Annual Graduate Student Symposium in Art History where she won third place for the Harrison Award for Excellence in Research. 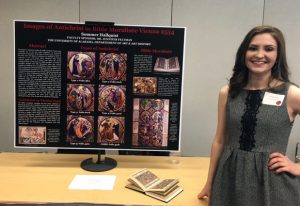 These awards, as well as her recent study abroad experiences, have come about in part because of the goals Hallquist has set for herself. “I have most definitely been setting goals to accumulate experiences that will be useful to me both in graduate school and hopefully within my career.”

Last summer Hallquist went on two big adventures. First, she studied at the National University of Ireland, Galway, on the west coast. She took courses in Late Bronze Age and Early Medieval Irish art and in Archaeology in Ireland. “We visited numerous sites on the Burren in County Clare that included wedge and chambered tombs that had been excavated by the professor himself!”

Hallquist was also invited, along with two other UA students, to accompany Professor Ian Brown of UA’s anthropology department to participate in excavations in Greece. The program is part of the College of Arts and Sciences’ Alabama-Greece Initiative, in which UA professors and students collaborate with their peers at Aristotle University in Thessaloniki, Greece. Hallquist had worked with Dr. Brown on gravestone iconography in 2015 through UA’s Emerging Scholars Program. That year, she and fellow anthropology major Madeline Anscombe won second place for their gravestone iconography research project in the Emerging Scholars Division of Fine Arts and Humanities at the URCA Conference.

Also last summer, Hallquist spent two weeks working on excavations in Vergina, Greece, known for the tomb of Philip II, father of Alexander the Great. Hallquist elaborated, “The goal of our project was to learn more about the city’s layout, daily life in the time period and the role of the people who lived within the city and used this sanctuary.” Hallquist’s days were divided between fieldwork in the morning and early afternoon and laboratory work and scholarly lectures in the evening. Lectures were by the project archaeologists, including one who had been on the original excavations of Philip II’s tomb in the 1970s.

As part of her goal of gathering more archaeological experience, Hallquist also has a job as a lab assistant at PanAmerican Consultants in Tuscaloosa, where she is able to work with Woodland, Mississippian and historic period artifacts.

Looking ahead to her summer of medieval art at the Met Cloisters in New York, Hallquist is enthusiastic. “I am beyond excited for this incredible experience. I will have the opportunity to conduct my own research project and public presentation incorporating materials from the museum’s collections and in conjunction with the museum professionals at the Cloisters.” As for the future, Hallquist wants to continue her studies in Early Medieval art, specifically in illuminated manuscripts and so will apply to graduate schools in art history this fall. “I am very drawn to Insular art, so I may focus my attention there, but have yet to set that in stone.”

Go to our website for more information about UA’s Department of Art and Art History’s art history and other degree programs.