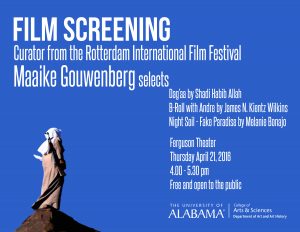 for the International Film Festival Rotterdam (IFFR). Gouwenberg will talk briefly about the short films before their showing on Thursday, April 21, 2016 from 4:00-5:30 p.m. in the theater in Ferguson Student Center on UA campus. The public is invited to attend.

Dag’aa by Shadi Habib Allah – “A tough journey with a Bedouin group across the Sinai Peninsula, far from habitation. Everything seems to take place outside political and historical frameworks.” Official trailer on Vimeo.

B-Roll with Andre by James N. Kienitz Wilkins – “A documentary-style detective film with anonymous testimony about Andre, who proves more than just a brilliant crook. Clichés scrutinised with humour.” Official trailer on Vimeo.

Night Soil/Fake Paradise by Melanie Bonajo – “A study into the hallucinatory ayahuasca plant’s healing power for modern man. On the limits of Western medicine, love, feminism and eco-consciousness.” Trailer on Youtube.

Maaike Gouwenberg is a curator based in Rotterdam, Netherlands. In the last few years she was programmer advisor for IFFR Shorts and since 2015, part of the core team. In her curatorial work, she is interested in performative practice. The projects she has been involved in bring together theatrical and curatorial aspects, which results in performance programs and long-term collaborations with artists. In 2010, Gouwenberg initiated A.P.E. (art projects era) with artist Keren Cytter. Since 2014, Gouwenberg has co-directed her own multidisciplinary residency program, Deltaworkers, in New Orleans. She is a committee member at STROOM (The Hague) and Amsterdams Fonds voor de Kunst, and is a board member of the musical theater group Touki Delphine.

Digital Media is a studio concentration in the undergraduate program of The University of Alabama’s Department of Art and Art History that focuses on new media and digital art. Courses explore digital media as the primary tool, medium and an environment for art and design. For more information, go to https://art.ua.edu/academics/undergraduate-programs/digital-media/.