In conjunction with a talk and workshop at UA, Lisa Iglesias will also present a drawing installation at The Fuel & Lumber Company’s Tuscaloosa Project Space at 2003 8th Street, downtown Tuscaloosa. Iglesias will speak on her work Thursday, February 11, 2016 at 6 p.m. in 203 Garland Hall and will lead a workshop in Pete Schulte’s Concepts/ Advanced Concepts in Drawing class (ART 344/444). 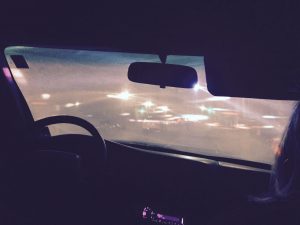 Jane Cassidy observes that driving at night outside of the city presents a very distinct atmosphere. The tempo of traffic passing by, the static of the night sky and the textures of the landscape all provide an immersive environment. Music For Cars At Night On Country Roads is an immersive audio visual installation where the audience is invited into a 2008 Chrysler Town & Country van. A saturating 30 minute musical score plays through the stereo system while synchronized videos of night driving are projected onto the windshield. 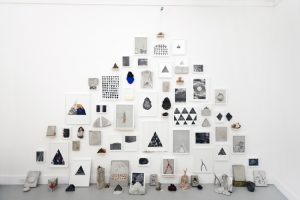 Lisa Iglesias received the MFA from the University of Florida in 2006 where she now teaches drawing and painting as assistant professor. A native of Queens, New York, she works collaboratively and individually with her sister Janelle Iglesias as Las Hermanas Iglesias. She has exhibited around the United States, Mexico City and Australia: Mulherin New York; Hudson D. Walker Gallery, Provincetown; Y Gallery, NYC; Abrons Art Center, New York; and the Bett Gallery, Hobart, Tasmania, among others. Her website is here.

Jane Cassidy is primarily trained in music composition and animation. Cassidy received a Masters of Philosophy in Music and Media Technologies from Trinity College Dublin in 2008 as well as an MFA in Digital Art from Tulane in 2014. Her interests lie in visual music, installations, live VJing, electro-acoustic composition and multi-channel work. Most recently, she presented an immersive environment for Cinema Reset during the New Orleans Film Festival, Music For Cars At Night On Country Roads. She is assistant professor of digital media at The University of Alabama.