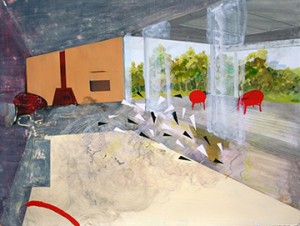 Tuscaloosa, AL. — The Arts Council of Tuscaloosa will present “Between the Clouds” at the Dinah Washington Cultural Arts Center Feb. 7 – 28, 2014. The exhibit will feature works on paper in watercolor, mixed media and pencil by artist Bryce Speed in The Arts Council Gallery.

Speed describes the work in his artist’s statement: “I am interested in the juxtaposition of atmospheric space with modernistic architectural detail. Conceptually, the work investigates ideas centered around isolation, the politics of architecture and the persistence of loneliness in a socially connected age. Often within the compositions, outside and inside merge, creating an ambiguity of space where architectural forms reference both the stability and instability of identity. Forces of nature, like water, fire and wind invade and sometimes destroy these structures. Destruction paired with the temporary (or resilient) nature of architecture serves as a metaphor for the evolving self.”

Bryce Speed was born in 1978 in Collins, MS. In 1999, he earned a BFA in Painting and Drawing at the University of Mississippi, and in 2005 he graduated with an MFA in Painting from The University of Alabama. He has taught at the University of Nebraska at Omaha and Central Community College in Columbus, NE and is currently an instructor at The University of Alabama. The artist’s work has been included in numerous exhibitions in several states over the past few years. In 2006 and 2011 his work was selected for publication in New American Paintings, Southeastern and Western editions. In 2009, he exhibited new work in a show titled “The Great Wave” at PS 122 Gallery in New York, NY. He exhibited at the Nebraska Governor’s Mansion and the University of Nebraska at Kearney in 2011. His work will be included in a three-artist exhibition at HEREart titled “Suburbia” in New York, NY in 2014.  Speed’s work is represented by Modern Arts Midwest in Omaha, NE.