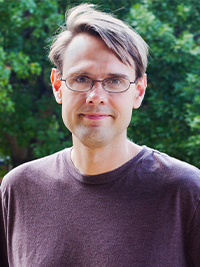 The process of teaching art history has greatly informed his work, especially in thinking about how artists chronicle the times in which they live. In the studio, he uses traditional methods of oil painting to explore the disjointed nature of contemporary culture. His current body of work explores this theme through a constructed symbolic system that reflects both a personal and societal desire for meaning.

Wegrzynowski has been regularly exhibiting work for two decades, most recently at the Wiregrass Museum of Art in Dothan, Ala., Lowe Mill in Huntsville, Ala., and the Delaplaine Visual Arts Center in Frederick, Md. He has exhibited work nationally, at Jonathan Ferrara Gallery in New Orleans, the Contemporary Arts Center in Las Vegas and the Transmission Gallery in Oakland, Calif. He has presented solo shows at the Malone Gallery at Troy University (Troy, Ala.) and the Sarah Moody Gallery of Art in Tuscaloosa, as well as two man shows at the Bagwell Center for Media and Art in Knoxville, Tenn., and the Meridian Museum of Art in Mississippi.

Awards for Wegrzynowski’s work include the Reece Museum Award in the 2022 International FL3TCH3R Exhibit: Social & Politically Engaged Art, East Tennessee State University; the Trudy Williamson Award for Excellence in Two Dimensional Work from the St. Tammany Art Association in Covington, La.; and the Howard & Michael Goodson and Richard Zoellner Purchase Award from The Arts Council of Tuscaloosa. He is also a past recipient of an emergency support grant from the Joan Mitchell Foundation.

In addition to painting, Wegrzynowski is also interested in collaborative projects. These include the “Hand to Hand” chronicle of the Iraq War, which was curated by Cecelia Kane and exhibited nationally; illustrations for Alan May’s anthology, “Dead Letters”, which was published by BlazeVOX in 2009; and Jerry Cullum’s conceptual catalog of the “First Walker Street Biennial”. Prints relating to a previous Alan May collaboration, “Notes Toward an Apocryphal Text”, were added to the Avant Writing collection at The Ohio State University.

View images of a recent exhibition of Wegrzynowski’s work on UA campus.