This article is reprinted from the Fall 2013 issue of The University of Alabama’s Undergraduate Research magazine.

The Paul R. Jones Collection of American Art provides UA students with a wealth of learning opportunities, both scholarly and creative.

When you consider the term art history, what comes to mind? Perhaps you envision a darkened classroom and a large screen, upon which only the works of canonized masters are projected. Or maybe you think of those expensive books in museum gift shops – the ones that wind up on coffee tables.

Do you relate to it in your everyday life? Does it tell you anything about your culture and history? Do you have a say in what makes the canon of art?

Before you answer, consider the Paul R. Jones Collection of American Art at The University of Alabama.

The late Paul R. Jones was an art collector who over his lifetime amassed one of the largest collections of African-American art in the world. His selections were eclectic, but they all reflected his passion: “The collection speaks of a politics of integration and equality, revival, trying to fundamentally change the path of art history and the way that we understand art and its categories,” said Lucy Curzon, assistant professor of art history at UA and director of education and outreach for the Paul R. Jones Collection of American Art.

In 2008, Jones donated 1,700 pieces from his collection, valued at $4.8 million, to UA. But the collection is not here merely to be admired from afar – it’s an interactive learning tool for UA students of all disciplines, from art to political science.

Kevin Jones, now a sophomore, was a freshman when he began working as a research assistant under Curzon as part of the Emerging Scholars Program. While looking through the Paul R. Jones Collection archives, he stumbled upon his research subject: “The Thai portion of it really hit me because I thought, what drew Paul Jones to this? This isn’t really his style based on the rest of what he collected, so what are these and why did he see these as important?” said Kevin Jones.

Paul R. Jones acquired the 16 pieces of Thai art in the collection during his travels as a high-level administrator in the Peace Corps in the 1960s and ’70s, but not much else is known about the works. “The most we have on any of them is the first name of the artist and maybe a year and a title,” said Kevin Jones, “so it’s a big uncharted territory within the collection.”

Therein lies the great opportunity presented by the Jones Collection: the chance for the student to be the expert, the creator of art history.

“Kevin’s doing some really authentic sleuthing,” said Curzon. And it’s in the sleuthing that Curzon sees students hone their critical-thinking skills, as they have to determine for themselves whether a source is reliable.

“Students do tend to learn,” said Curzon, “that with a lot of these artists – not just the Thai artist that Kevin is working on, but African-American artists in general, which are 95 percent of the collection – often what we do find is anecdotal. It is information that wouldn’t necessarily be considered scholarly, not because it isn’t valid information, but because no scholarly practices have evolved around this work in the past, nor was this work in and of itself considered part of the canon of art history.”

So when Kevin Jones hesitated to use a lead about a Thai artist by the first name of Wancharoen because the website was not a scholarly source, Curzon used it as a teaching moment.

“We had the discussion about distinguishing between reliable and unreliable sources,” said Curzon. “But also when you don’t have anything, you kind of have to go with something. If there’s this branch that’s being held out, you shouldn’t not use it.”

The artist, whose full name is Wancharoen Japakang, from the town of Chiang Mai, turned out to be fairly famous in Thailand. Though he was not in major artist databases, Kevin Jones did find blogs and other obscure sources that mentioned him and even reached out by email to an American expatriate who had once interviewed the artist.

“It was really cool that just from a first name that someone, presumably Paul, had written in the corner of the canvas – taking that and then rediscovering the history of these paintings,” said Kevin Jones, who presented his findings last April at UA’s undergraduate research conference.

The information that student researchers uncover helps flesh out the Jones Collection’s artist files and supplement exhibit materials. Sometimes it turns out that an artist is quite well known. For instance, the late Georgia folk artist Reuben Aaron Miller fashioned a living out of making metal cutout whirligigs, and his spinning outdoor sculptures were featured in a video for the band R.E.M. However, many times, all that can be verified is that an artist is deceased, which in itself is valuable information. And then there are the times when nothing at all can be found about an artist. One student, despite going to great lengths, could not even decipher an artist’s first name to begin biographical research.

“What I like to emphasize to the students when they’re doing this sort of work,” said Curzon, “is that when they come up against a dead end, they should start to think about things not as specific as a name but something that is much more general. We can date the piece of work. We can determine from what the artist was depicting in a particular image that this might have been an artist who was working in the United States. So why not work out from there? Think about the date, think about the cultural context of the United States in 1978.”

Finding that bigger story – a piece of art’s meaning in the larger context of our culture and history – can be just as illuminating as uncovering the details of an artist’s life. Just ask Jane Smith, a UA Emerging Scholar and a senior psychology major with minors in art history and addictive disorders and recovery, who is assisting with the editorial development of a book about the Jones Collection.

As a psychology student, Smith is particularly interested in art therapy and the emotional aspect of the creation of art. Beyond simply looking at works in the collection, said Smith, the book will act as a guide on how to teach about and interact with art and will help fill an important gap in art history – which is exactly what Paul R. Jones had in mind when developing his collection.

“If your average professor opened an art history textbook, like Gardner’s, they would not see works like the ones in the Jones Collection,” said Smith. “However, especially in classes that go into modern eras, whether an English class or a cultural studies class, the works in the Jones Collection can provide an insight into the times and situations in which they were created.”

Recently, Smith presented a poster about her research for the book at an undergraduate conference, where she was asked what makes art history relevant outside of specific academic coursework. “My answer,” said Smith, “was that art history provides a very specific insight into cultures that we frequently miss with other history classes because of how it incorporates emotions and, especially in modern times, is not necessarily the history of the victor.”

UA student researchers will continue to seek out and share unknown histories and cultural lessons from the Paul R. Jones Collection. But there is one lesson that’s a constant: the example set by the man himself.

As Louise Corrigan, a recent graduate of UA’s New College who worked with the Jones Collection as part of an independent study class, puts it: “Working through the Jones Collection challenged me to think about the moral compass that Mr. Jones used in every acquisition, but more importantly, every relationship he made with an artist. I appreciate … the way [he] made the artists feel valued as people and as artists, and his ability to build awareness and increase the value of the works by the vastly unknown artists. I ask myself every day, ‘Louise, what are you doing to add value to the world?’” 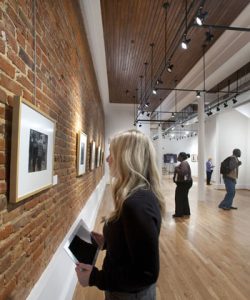 “Paul R. Jones believed that art can always be used to start a conversation,” said Lucy Curzon, assistant professor of art history. And in that light, UA professors of all disciplines are invited to use the Jones Collection to enrich their curriculums. Recently, Sarah Marshall, an associate professor of art, had her printmaking students each create a piece in reaction to an inspiration piece from the Jones Collection. The students’ works were displayed alongside their inspirations in the show “React” at the Paul R. Jones Gallery in downtown Tuscaloosa. Here are a few of the lessons learned.

Lesson 1: Get out of your comfort zone and go big.

Erin Nelson, a photojournalism major/art minor who graduated in May 2013, chose to react to artist John Wilson’s “Dialogue,” an intaglio print of a young boy’s face next to a skull. The class was learning the intaglio printing technique using 6×9-inch metal plates, but for Nelson’s playful take on “Dialogue,” for which she used her dog as the subject, that size just wouldn’t do.

“I knew I wasn’t going to be able to put all of that even in a 9×12 plate, so I really went big and put it into an 18×24. Sarah likes to say I kind of skipped a whole semester in doing that,” said Nelson. “It put me out of my comfort zone, but at the same time, I think that was a good thing.”

Lesson 2: Explore and do what you love.

Exploring the archives of the Jones Collection to find her inspiration piece was big moment for Kayla Huguley.

“Just getting to see a lot more of the collection was awesome. We walked in and I’d never seen that much of it before. Any time we’ve seen it, it’s just the selected pieces in the gallery in different shows, but seeing it all together like that was incredible,” said Huguley, an art major who graduated in May 2013.

“It’s big and it’s red and it kind of envelops you,” said Huguley. “Everything I do involves chickens – I really love them. So as soon as I saw that, I thought, well, I’ve got to do this now.” Huguley opted to create a quieter moment with her small screen print, but she was inspired by the reds in Smith’s painting. “It’s just really warm and familiar. I like it because it makes me think of home.”

Lesson 3: To learn from the masters, get up close and personal.

Ben Bailey, a senior art major, was intrigued by the sculptural quality of artist Mamie Joe Rayburn’s intaglio prints. Rayburn achieved this effect by piecing together multiple metal plates instead of using a single rectangular plate. When the plates are pressed into the paper, the paper rises up between the joints, giving the print a three-dimensional quality that’s not possible with only one plate. For Bailey, who used the multi-plate technique for his final project, this learning experience was made possible by seeing the art in person, versus a flat reproduction in a book or on a computer screen. That’s why having the Jones Collection on campus is such a valuable tool for UA students.

“Especially our generation, we see the pictures [of art] on the Internet and we build this false understanding in our head. We say, ‘Oh, we’ve seen that,’ when we haven’t. We’ve seen pictures of it. But when you see it [in person] and you can see a brush stroke, you can relate because you say, ‘I’ve made a brush stroke that looks like that’ – that personal, nonfiltered experience was a pretty special moment for me,” said Bailey.

To find out more about The University of Alabama’s programs in studio art and art history, visit our Degree Programs page.