Two UA studio art alumni recently completed a set of innovative bicycle racks, the second of their kind, for the City of 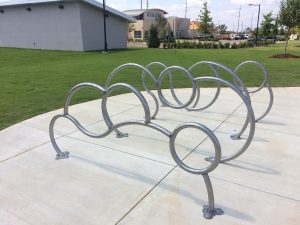 Tuscaloosa. The unique, sculptural bike racks, designed by Brandt Deeds (BA 2017) and built by Deeds and Alli Sloan (BA 2015) were installed at the new Alberta Park, next door to The Gateway, Alberta’s Technology and Innovation Center on University Boulevard, during the first week of September 2017. Alberta Park is part of a larger project of rebuilding and improvements in Tuscaloosa along the path of the April 27, 2011, tornado. Both bike racks are part of a plan, supported by the City of Tuscaloosa, The University of Alabama and other community organizations to encourage more biking in and around Tuscaloosa.

From the beginning, Deeds and Sloan have been enthusiastic about the design-build project. Professor Craig Wedderspoon, who has been overseeing their work in the UA art foundry, said that they easily worked together because they were on the same page from the start. “Alli and Brandt are both avid bikers so they know what bikers want in bike racks, what adaptations are needed, like the way locks fit or how many bikes can actually fit in a public rack. They each came up with designs on their own and when we met, we realized their ideas were very similar.” Last summer, Alli Sloan designed the bike racks at 4th Street and 23rd Avenue downtown and then she and Deeds built those. This summer, Deeds’ design was built by Sloan and Deeds for Alberta Park. 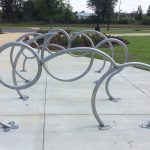 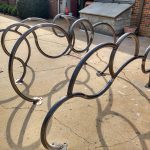 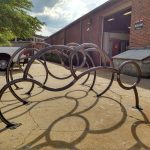 Like its predecessor in downtown Tuscaloosa, the Alberta Park set’s unusual design is innovative and practical. The designs are similar in size, but each is unique unto itself and quite different from standard bike racks. Sloan described her bike rack design as “an organic, wave-like composition.” The steel pipes in each design curve are undulating circles that echo the shapes of bicycle wheels, creating eye-catching patterns that stand out like sculpture. But those undulations have a practical value, too. Sloan said that the variety of sizes of loops in the rack’s design allows bikers with U-locks to more easily lock up their bicycles. Both bike racks can hold up to sixteen bikes each, as opposed to only seven bikes on the factory-made designs that would have been used.

Each student brings a unique skill set to the project. Originally an engineering student, Brandt Deeds graduated in the summer of 2017 with a BA in studio art, focusing on sculpture, and a minor in mechanical engineering. Alli Sloan double-majored in advertising and studio art with a focus on graphic design in 2015. Both alumni also designed and built steel sculptures for the Nucor Children’s Charity Classic silent auction and took courses in sculpture with Professor Craig Wedderspoon. 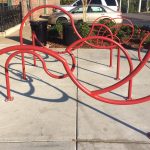 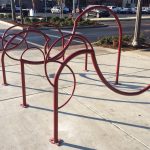 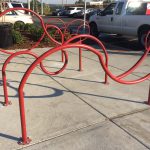 For more information about The University of Alabama’s programs in studio art and art history, go here: https://art.ua.edu/academics/graduate-programs/art-requirements/.